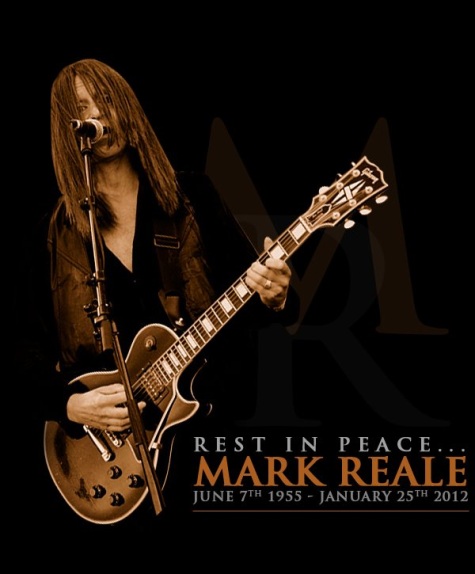 Former/current members of MEGADETH, ANTHRAX and PILEDRIVER have commented on the passing of Mark Reale, the founding guitarist of the legendary metal band RIOT. Reale died yesterday (Wednesday, January 25) in a San Antonio hospital due to complications of Crohn's disease — an ailment he had battled for most of his life. He was 56 years old.

Marty Friedman (ex-MEGADETH): "I just heard that Mark Reale from RIOT passed away. 'Rock City', 'Narita' and 'Fire Down Under' are three of my favorite albums of all time. I wore all three of them out and have loads of great memories attached to all those great songs. Thank you for the music. Friends please take care of yourselves."

Neil Turbin (DEATHRIDERS, ex-ANTHRAX): "RIP Mark Reale 1955-2012 RIOT guitarist and founder. My favorite metal band in high school and one of my greatest musical inspirations of all time. 'Fire Down Under' was such a huge influence on me when I was writing songs like 'Metal Thrashing Mad'. My sincere condolences to Mark's family, friends, fans and bandmates. Shine on, warrior."

Reale had reportedly been in a coma for the past two weeks after suffering a subarachnoid hemorrhage on January 11.

Mark is survived by his father, Anthony Reale, and was preceded in death by his mother, Frances Reale.

Mark spent most of his life working and performing while enduring almost constant pain and the side effects of treatment for Crohn's disease. He was in Texas bravely attempting to practice for the shows, but was felled by a severe onset of Crohn's symptoms, leaving him in the Intensive Care Unit at an undisclosed facility. Mark was struggling with these symptoms throughout the production of RIOT's new album, "Immortal Soul", and guitarist Mike Flyntz recorded a major portion of the guitars on the LP with Mark's creative direction while Reale was unable to perform.