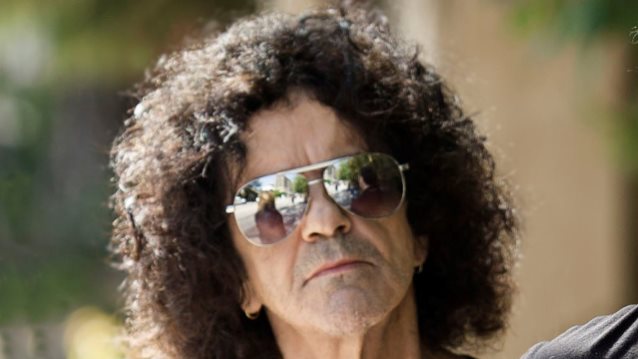 According to a number of industry sources, former RAINBOW and DIO bassist Jimmy Bain has passed away at the age of 68. The news was confirmed by ex-DIO drummer Simon Wright and Diana Deville, a former employee of Wendy Dio's Niji Management. More details about Bain's death will be posted here as soon as they become available.

Back in 2012, Bain made headlines when he was arrested in Burbank, California on suspicion of driving under the influence of drugs.

Since 2013, Bain has been a member of LAST IN LINE, also featuring his fellow ex-DIO bandmates Vivian Campbell and Vinny Appice along with singer Andrew Freeman.

LAST IN LINE performed in Miami, Florida on January 20 and is currently taking part in DEF LEPPARD's inaugural "Hysteria On The High Seas" cruise.

In an interview, Bain stated about his time with DIO: "Towards the end of DIO, it got to be too much though, with the stage show and the spiders and the guitar that shot lasers. When we first started on 'Holy Diver', playing with half a drum kit and all, we just knew it was magic. I wrote a lot on the first two albums but it just got harder and harder to come up with stuff. We all thought 'Last In Line' was a bit smooth, although I liked everything about it, the cover, everything. By the time 'Sacred Heart' happened, I looked at that monster on the cover and thought, he's laughing at me now!"

He continued: "Touring was always a blast. I was famous for being lit up and still being able to play. I even fell over a few times. It was like it was part of the show. Ronnie and I got pissed together a few times but I always got carried away and had to be carried to the limo and stuff. But as long as I played live and was creative and wrote songs, it didn't matter. Toward the end, Ronnie was having fights with Viv, and you get to a point where you just think you've got it, and you think you can bring in keyboards and play with the arrangements. I always thought we had such a unique sound, we could just be DIO. We didn't have to try write like anybody else."

I am in shock to hear that yet another one of our Rock friends has passed on. RIP Jimmy Bain. You will be missed. #grimreapersucksagain #heartbroken

Jimmy Bain has passed away. I'm saddened by the loss of my friend. David & I were very close with Jimmy. Godspeed! pic.twitter.com/dDO9M7nvcg

Jimmy Bain was a true musician and songwriter. He was involved and wrote more than u probably imagine.