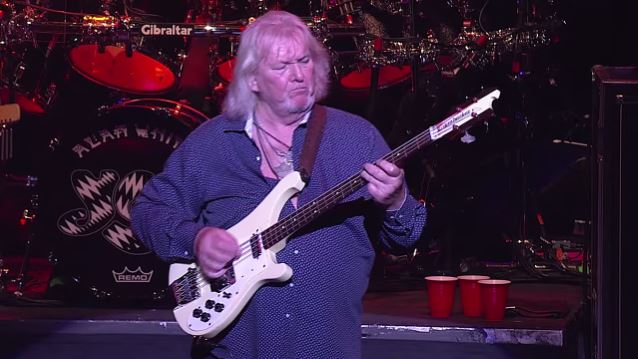 Chris had been receiving treatment in his hometown of Phoenix since he was diagnosed with the disease in May.

Squire's YES bandmate Geoff Downes wrote on Twitter: "Utterly devastated beyond words to have to report the sad news of the passing of my dear friend, bandmate and inspiration Chris Squire."

YES has also released a statement on Squire's passing. It reads: "It's with the heaviest of hearts and unbearable sadness that we must inform you of the passing of our dear friend and YES co-founder, Chris Squire. Chris peacefully passed away last night in Phoenix Arizona, in the arms of his loving wife Scotty.

"For the entirety of YES' existence, Chris was the band's linchpin and, in so many ways, the glue that held it together over all these years. Because of his phenomenal bass-playing prowess, Chris influenced countless bassists around the world, including many of today's well-known artists. Chris was also a fantastic songwriter, having written and co-written much of YES' most endearing music, as well as his solo album, 'Fish Out Of Water'. Outside of YES, Chris was a loving husband to Scotty and father to Carmen, Chandrika, Camille, Cameron, and Xilan.

"With his gentle, easy-going nature, Chris was a great friend of many … including each of us. But he wasn't merely our friend: he was also part of our family and we shall forever love and miss him."

Squire was recently replaced in YES's touring lineup by Billy Sherwood, who played guitar and keyboards as a touring member of YES in 1994 and as a full member from 1997 to 2000.

"This will be the first time since the band formed in 1968 that YES will have performed live without me," Squire said in a statement back in May. "But the other guys and myself have agreed that Billy Sherwood will do an excellent job of covering my parts and the show as a whole will deliver the same YES experience that our fans have come to expect over the years."

YES's co-headlining North American tour with TOTO will kick off on August 7 in Mashantucket, Connecticut.

As previously reported, Frontiers Music Srl will release "Like It Is - Yes At The Mesa Arts Center", a new concert recording from YES, on July 3 in Europe and July 10 in North America.

Available in 2CD/DVD, Blu-ray and digital formats, with a later release planned on vinyl too, this new live album, which follows a similar path to the successful release "Like It Is – Yes At The Bristol Hippodrome", sees two of the band's signature albums, 1971's "Fragile" and 1972's "Close To The Edge", performed live in their entirety on the band's 2014 world tour.

Recorded live on August 12, 2014 at the Ikeda Theater in Mesa, Arizona, featuring Chris Squire, Steve Howe, Alan White, Geoff Downes and Jon Davison, "Like It Is - Yes At The Mesa Arts Center" offers an exciting take on two amazing pieces of music which include live staples such as "Roundabout", "Heart Of The Sunrise", "And You And I" and the epic "Close To The Edge".

Utterly devastated beyond words to have to report the sad news of the passing of my dear friend, bandmate and inspiration Chris Squire. #yes