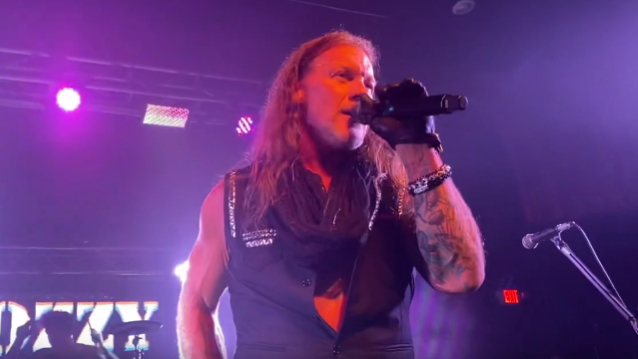 FOZZY played its first show with the band's new drummer Grant Brooks (THROUGH FIRE) last night (Thursday, March 31) at the Diesel Concert Lounge in Chesterfield, Michigan. Fan-filmed video of the performance can be seen below.

Brooks joined FOZZY in January as the replacement for the group's longtime drummer Frank Fontsere.

Frank discussed his departure from FOZZY in a recent interview with the "Talk Toomey" podcast. The 54-year-old musician said: "I've been doing it a long time, and I still love playing, and I still love playing live, but I've never been the biggest fan of the traveling. I'm not Dora The Explorer; I don't really care about seeing exotic places or all that stuff. For me, it was always about the shows. I used to think, 'Man, it would be nice if I could just teleport to every show.' And especially having a kid — he's seven years old — I was missing him. We weren't spending tremendous amounts of time on the road, but still, it was just getting harder. And there were other factors too; there were other things I wanted to pursue. I kind of needed to figure out who I was, who Frank Fontsere was as opposed to Frank the drummer for FOZZY. That was the entirety of my identity, and I needed to figure out who I was and can I just go out there in the world and do something completely on my own.

"It had been years and years and years of 'the kind of success that will sustain me is just around the corner' or 'the kind of success that will sustain us is just around the corner' — it was always 'just around the corner.' And I couldn't take that anymore," he continued. "'Cause the band is doing well, but it's not like we flew around on private jets and stuff like that; there were still things to deal with. We would have tour buses and they were nice and everything, but there was still a lot of showering at truck stops and gyms and things like that. I'm not a snob — it's not like that's some kind of true hardship — but it just wears on you after a while when you get to be in your 50s, especially when you don't have any skin in the game. I didn't have any songwriting credits — I'm not a songwriter — and I had no control over what the band did at all; I had no say over what the band does. It was, like, when they say 'jump,' I say 'how high?' And it's not like they were dictators or anything like that — we had a good relationship — but ultimately, I feel like I'm working toward something, or at least I was trying to work toward something and I didn't have any real control over the outcome."

Frank added: "They say, 'Well, if you're gonna fail, fail on your own terms.' The band that follows their heart and does the music that means something to them, they think, 'Well, if we sell no records, at least I have the records and at least I can be proud of that.' And I didn't really have that; I had no real investment in what was going on."

Fontsere was a founding member of FOZZY, having formed the group in 1999 with singer Chris Jericho and guitarist Rich Ward.

In a separate statement on his personal Facebook page, Brooks said that he was "super excited" about his new gig. He wrote: "So thankful for this amazing opportunity! Huge shoutout to Rich Ward, aka The Duke and Chris Jericho for reaching out to me and offering me the gig."

FOZZY will release its new album, "Boombox", on May 6. The LP, which includes the top 10 singles "Nowhere To Run" and "Sane", was once again produced by Johnny Andrews.

FOZZY's "Save The World" 2022 U.S. tour, featuring special guests GFM, KRASHKARMA and THE NOCTURNAL AFFAIR, will wrap on May 16 in Sauget, Illinois.

I was there at tonight’s Fozzy concert in Detroit Michigan & it was amazing! Thanks @FOZZYROCK for the amazing performance and for giving us a night to remember! And thanks @IAmJericho you’re the best in the world at everything you do indeed!!! #dieselconcerttheatre#fozzyrockpic.twitter.com/p4iT2UAAnc 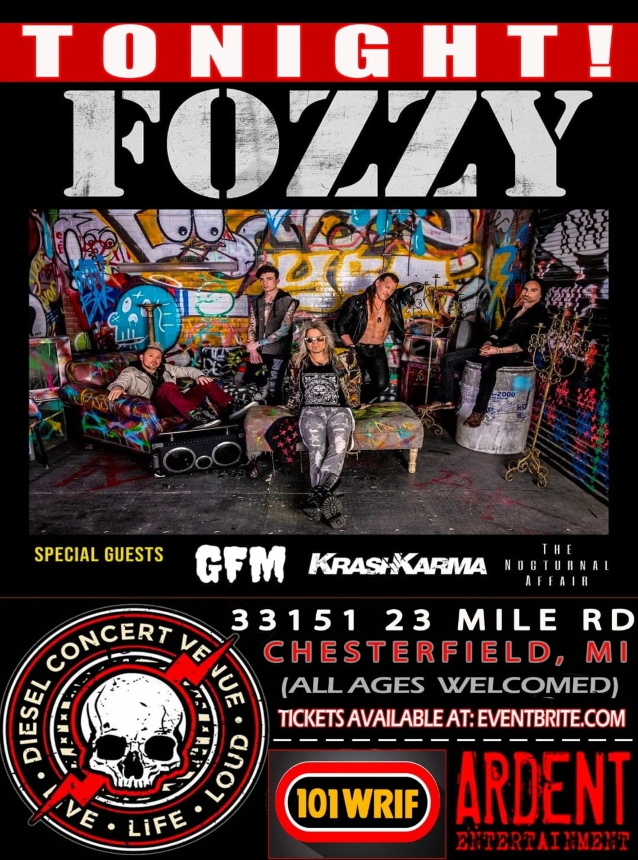