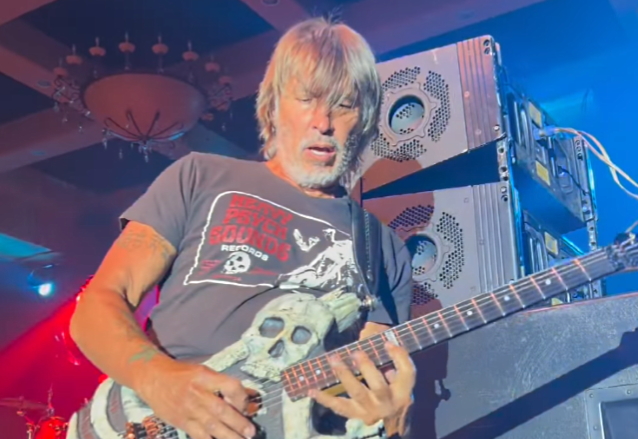 Fan-filmed video of LYNCH MOB's October 15 concert at the Buffalo Thunder Resort in Santa Fe, New Mexico as the support act for DOKKEN can be seen below. Joining legendary DOKKEN axeman George Lynch at the gig were his longtime drummer Jimmy D'Anda (BULLETBOYS) along with TANTRIC bassist Jaron Gulino, and singer Gabriel Colon.

Over the weekend, Lynch shared a short video of the Santa Fe performance, and he included the following message: "super fun and intense show tonight in santa fe nm @lynchmob @dokken @buffaloruncasino @jimmydanda".

The news of LYNCH MOB's return was first reported by the Metal Sludge web site on October 1.

For much of the last year and a half, George had played dates around the U.S. under the name ELECTRIC FREEDOM, which he previously said was the new name of his "touring entity" after deciding to retire the LYNCH MOB band name in 2020.

In August 2020, Lynch announced that he was ending LYNCH MOB due to the racial insensitivity of the moniker, saying he would no longer record or perform under that name.

A few months later, Lynch offered a lengthy explanation for why he was ending LYNCH MOB during an interview with George Dionne of Metal Express Radio. Addressing questions about why it took him three decades to call it quits with LYNCH MOB, George said: "When we first formed the band in '89, the name had sort of already been around. While I was in DOKKEN, it's what I called our little group of guitar fans — I had picks made; it was kind of a little subculture within DOKKEN. When we started working on developing and building the band after DOKKEN broke up, that was just the name that we always thought we'd use, 'cause it was a perfect fit — it's my name, and it describes it pretty well. And, of course, the negative connotations were always there, and I was aware of 'em, but not as aware as I probably should have been. [Laughs]

In August 2021, LYNCH MOB celebrated the 30th anniversary of "Wicked Sensation" with a special limited print/deluxe edition of the album. "Wicked Sensation Reimagined" features re-worked and re-recorded versions of the LP's classic songs, and was made available via Rat Pak Records.