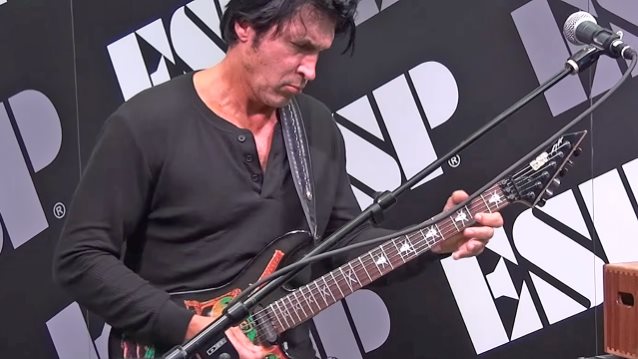 George Lynch (LYNCH MOB, KXM, DOKKEN) took part in a demo at the ESP booth at this year's NAMM show, which is being held January 19-22 at the Anaheim Convention Center in Anaheim, California. You can now watch video footage of his January 20 appearance in two parts below.

The follow-up to KXM's 2014 self-titled debut is currently available for pre-order via the Rat Pak web site in various bundles, including signed CDs and t-shirts.

"Scatterbrain" was recorded at the Steakhouse studio in North Hollywood, California. The 13-track effort was helmed by Chris "The Wizard" Collier (FLOTSAM AND JETSAM, PRONG, LAST IN LINE),who also produced KXM's debut.

Recorded over the span of ten days, every song on "Scatterbrain" was the result of a musical jam from all three members playing together in the same room.