GHOST will once again bring the "euphoric spectacle" (Rolling Stone) of its live ritual to North America for the next leg of its globally dominating "Imperatour". The North American "Imperatour" will see the Grammy Award-winning Swedish theatrical rock band headlining 19 arenas across the U.S. and Canada (plus an appearance at Virginia's Blue Ridge Rock Fest),kicking off August 26 at San Diego's Pechanga Arena and running through September 23 at the Resch Center in Green Bay. Support on all dates (with the exception of Green Bay which will feature support from CARCASS, and the Blue Ridge Rock Fest) will come from Grammy Award-winning band MASTODON, who have quietly evolved into one of the most influential, inimitable, and iconic rock bands of the modern era, and SPIRITBOX.

* GHOST and SPIRITBOX only
** GHOST, SPIRITBOX and special guest CARCASS

GHOST mastermind Tobias Forge worked on the follow-up to 2018's "Prequelle" with Åhlund and Swedish co-writers Salem Al Fakir and Vincent Pontare, whose credits include Madonna and Lady Gaga. 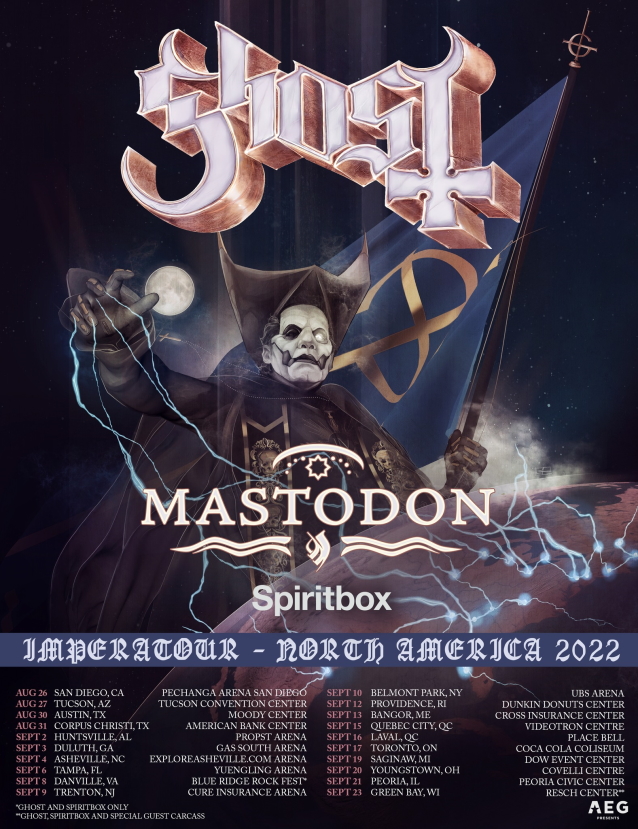