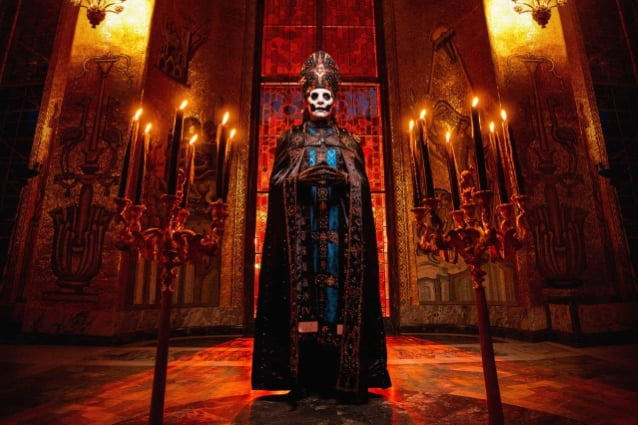 In a new interview with El Paso Inc., GHOST mastermind Tobias Forge spoke his decision to record the band's upcoming album "Impera" with producer Klas Åhlund, who also sat behind the desk for 2015's acclaimed "Meliora" effort. Asked why he chose to end his streak of working with a different producer on each new GHOST LP, Tobias said: "The thing is you need to keep moving so that you don't get stuck in friendly comfortable mode. 'Meliora', the record I made with Klas, was really good, but the recording and the production itself left a few things to be improved. When time came to record 'Impera', the writing and demoing had been done in 2020. But in early 2021, the American producer who was supposed to make the record couldn't come because of the travel restrictions, and I couldn't go to America. And because Klas is also a very scheduled person, he had a project lined up that fell through. All of a sudden, he had a few months off, and I was, like, 'That is well-timed, because I don't have a producer. Would you like to produce the record?'"

GHOST's fifth album, "Impera" will arrive on March 11 via Loma Vista. Forge worked on the follow-up to 2018's "Prequelle" with Åhlund and Swedish co-writers Salem Al Fakir and Vincent Pontare, whose credits include Madonna and Lady Gaga.

GHOST kicked off its co-headlining tour with VOLBEAT on January 25 at the Reno Events Center in Reno, Nevada. The 26-date trek, which includes special guests TWIN TEMPLE, will conclude on March 3 in Anaheim, California.