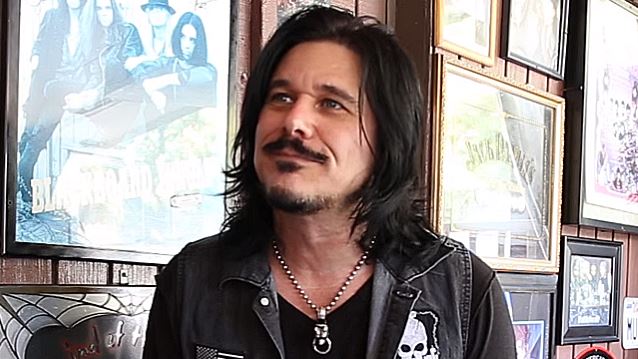 GILBY CLARKE On His Exit From GUNS N' ROSES: 'One Day The Checks Stopped Coming'

In a brand new interview with Front Row Ravers, former GUNS N' ROSES guitarist Gilby Clarke was asked about his time with the group more than two decades ago. He responded: "I can't really tell you anything new. It's been 25 years and the stories have all been told. When I joined the band, it was a popular band. It was easier for me coming in, as the band was successful. What was hard was fitting in the group that had already existed, personality-wise, musically and things like that. I was a good match — my guitar playing fit, my image fit and my personality fit. These are the key things that don't usually fit always. They enjoyed having new blood around too. The easy stuff was we were playing sold-out concerts and records were selling. The hard part is when records aren't selling, and concerts aren't selling."

Regarding how his journey with GUNS N' ROSES ended, Clarke said: "Well, [it was] really simple. Axl [Rose, GUNS N' ROSES lead singer] one day just wanted to change things up. I honestly didn't know what he wanted to do. He never talked to me directly; I always dealt with Slash. There was one week I was in the band and then the next week he was just pissed off with something. And finally one day the checks stopped coming. That's how it all ended."

Clarke was asked earlier in the month by podcast host Eddie Trunk for his thoughts on a GN'R reunion, following reports that long-estranged singer Axl Rose and guitarist Slash had recently repaired their relationship. Clarke, who was not an original member of the group, said: "It's strange. I mean, obviously, we've all heard [the rumors]. I actually did not know the news that Slash and Axl had talked, I didn't know, and I see him all the time. I don't know… I mean, obviously, it would be great for music if it did happen."

Clarke added that he has not heard anything about a reunion from anyone in the band and said that he didn't think a reunion would actually happen. "No, I really don't," he said. As for whether he might be asked to participate, Clarke said: "I think if it happened, obviously, it would be great, but I've got to be realistic. The fans want the original five guys, and I do too. It was a great band, [and] it would be great to see that. If it did happen, I would definitely be available to do it."