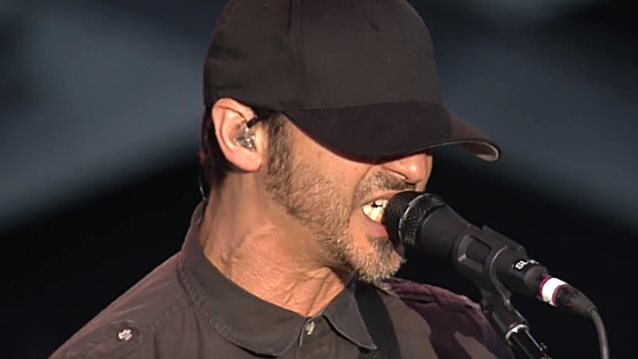 GODSMACK Is Hoping To Release New Single In January

GODSMACK is hoping to release a new single in the first few weeks of 2018 before following it up with a full-length album by early spring.

Speaking to Nivens of the 98.9 The Rock radio station at yesterday's (Saturday, June 3) Rockfest at Kansas Speedway in Kansas City, GODSMACK frontman Sully Erna stated about the progress of the songwriting sessions for the band's follow-up to 2014's "1000hp" album (see video below): "I've been working on it all year. Everyone's been writing. That's our main focus again right now — getting a new record out."

Asked if fans can expect to hear new GODSMACK music later this year or if they will have to wait until 2018, Erna said: "Definitely next year. We're gonna try to time this so we can drop the single right at the beginning of the year, January, and maybe drop the record by first week in April at the latest."

Erna recently walked back his previous comments that GODSMACK intends to commemorate its twentieth anniversary in 2018 with a massive world tour that could feature the group playing its self-titled 1998 debut disc live from start to finish. Erna told Wisconsin radio station 93X: "We don't know that yet. That's been circulating, 'cause I opened my mouth a little bit soon, but as we get deeper into writing this new record, that may change. So we're not making any promises on that yet."

Back in March, Erna told Houston radio station 94.5 FM about the tour: "We're gonna do a massive production. We're gonna kind of base it around the theme of the first record. We're even talking about coming out and doing the first record front to back to open the show."

Erna also said in the Houston interview that GODSMACK originally planned to put out a new album in 2017, but explained why that changed, saying: "We wanted to do something this year, but we were just, like, 'You know, let's just wait another second,' because if we release this at the top of 2018, it will be our 20th-year anniversary of the first record, and we wanna do something special."

Erna added: "I have to write a really great record for us, and that's the tough part."

GODSMACK has a a couple of more festival shows on tap over the next few weeks.