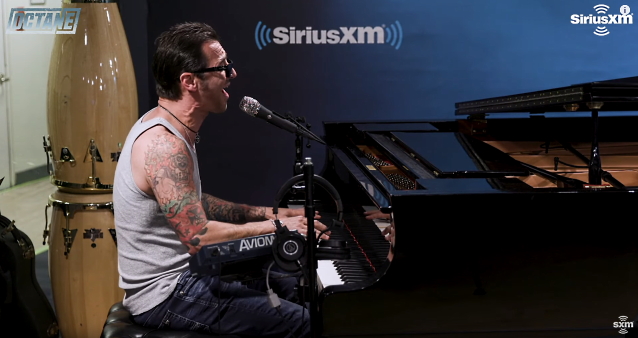 Video footage of GODSMACK frontman Sully Erna and guitarist Tony Rombola performing an acoustic version of the song "Under Your Scars" on SiriusXM's Octane Unleaded can be seen below.

"Under Your Scars" is taken from GODSMACK's latest album, "When Legends Rise", which came out last year. The disc was recorded at GODSMACK's headquarters (GSHQ) in Derry, New Hampshire and produced by Erik Ron and Erna.

Erna stated about the track: "'Under Your Scars' has become such an important song to me for so many reasons. It's the first time GODSMACK has decided to put this kind of a ballad on an album, which was pretty ballsy for us. I'm so happy that the fans have embraced it in the way they have, because the meaning behind it is so much bigger than any of us. It reminds me that taking all the credit without acknowledging the people or events that have touched our lives deeply enough to inspire songs like these, and so many others would just be wrong."

He continued: "So humbly I will say, this song came to me shortly after I had spent some quality time with someone who I consider a dear friend, and have grown to admire and respect as one of the smartest and most talented artists today, Stephanie Germanotta, who most of you may know as Lady Gaga. In the short amount of time we hung out, she made me realize that we all have these imperfections, these wounds that we carry (whether they're physical or emotional) that cut so deep they can cripple us. These feelings leave us vulnerable, or embarrassed, or even unworthy at times. And our human nature — when they're exposed — is to shut down, rather than embrace them and realize that not only can we overcome them, but we can also become an inspiration to inspire others to have a voice and find their inner strength to show their scars off loudly and proudly to the world. Our 'Scars' are nothing more than our battle wounds from life and they helped mold you into who you are today."

Erna added: "All of this is what drove us to create The Scars Foundation, our new non-profit organization battling everything from severe depression to addiction, bullying, suicide prevention and so on. Finding acceptance, that's what 'Under Your Scars' and what The Scars Foundation are about. We're all imperfect — that's what makes us perfect!"

Just prior to the release of "When Legends Rise", Erna told Classic Rock that "Under Your Scars" was "probably the most important song on this record where comes to expanding, because it's the first time we've really put a legitimate ballad on a GODSMACK record. It was the first time we introduced piano to the brand," he explained. "It was taking a little bit of what I've done over the years with my solo stuff, and hybriding it to come up with a more classic ballad, like the 'Dream On's and the 'Stairway To Heaven's and the 'November Rain's. I can't say it competes with those songs — obviously it's too new, and those songs are legendary — but I feel like it kind of has those elements of an epic ballad. It starts off very slow and keeps on growing and growing and growing into this big epic finale, and it has some of the deepest lyrics on the record."

He continued: "I think the biggest craving a human being needs to satisfy is the need to be loved, and as corny as that sounds we all carry these scars. What's important is that the connection is strong, and as long as you understand that you're willing to live with these scars, then you don't have to run away when something scares you."