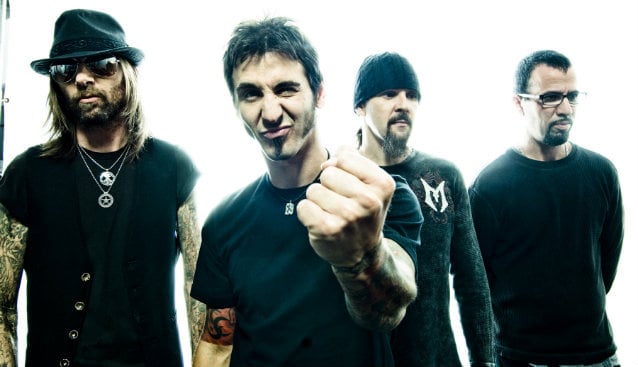 GODSMACK will be coming back later this summer with a new single and album, both titled "1000hp" (One Thousand Horsepower),and The Pulse Of Radio asked frontman Sully Erna for a hint of what the band's sixth studio effort sounds like. "This one just became a little bit more raw, a little bit more open," he said. "The writing was a little freer. The production is really kind of raw and in your face, and the songs, man — I'm really, really excited about these songs. And I have to tell you honestly, I wasn't that excited about writing this record at first."

GODSMACK's follow-up to 2010's "The Oracle" was once again helmed by Dave Fortman, how previously worked with SLIPKNOT and EVANESCENCE, among others.

An official release date has yet to be nailed down, but Erna said that fans should watch for tour dates and the new single very soon.

Erna spent the last few years pursuing projects outside the band, including the release of his first solo album, "Avalon", as well as a starring role in a new horror film called "Army Of The Damned", now out on DVD.

The other members of GODSMACK started their own new project a few years back called ANOTHER ANIMAL.

With 20 Top 10 hits on the rock radio charts in 16 years, Erna told The Pulse Of Radio a while back that he's proud of GODSMACK's track record. "You know, it is nice to know that we're creating stuff that's just kind of living on and that does really well in the active rock stations and the hard rock world and that kind of stuff," he said. "So we're in that middle ground. We're not quite as poppy as like AEROSMITH, but yet we're not as dark and metal as, you know, the SLIPKNOTs or the METALLICAs or whatever. So we're kind of like that in-between band."