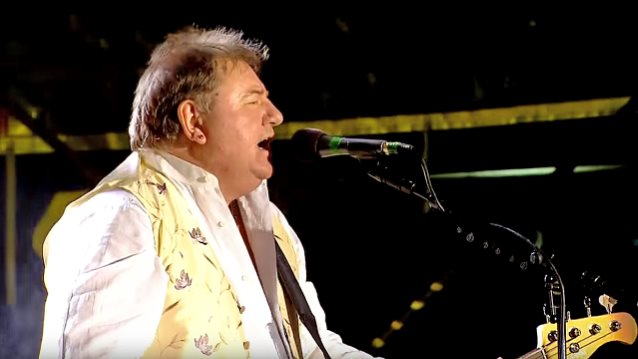 Greg Lake has told U.K.'s Express that he wasn't shocked by the tragic death of his EMERSON, LAKE & PALMER bandmate Keith Emerson.

The 71-year-old keyboard legend died last week as a result of a self-inflicted gunshot wound. In addition to confirming the death as a suicide, the Los Angeles County coroner noted Emerson had heart disease and "chronic depression."

Now Lake says that Emerson had been struggling with depression since at least 1977 and describes his friend as "increasingly confused, desperate and depressed" in his final years.

"I have to be honest and say his death didn't come as a shock to me," Lake said. "The situation with Keith didn't happen suddenly — it has been developed from as far back as 'The Works Vol. 1' album. At that point I began to see things happening with Keith which didn't look or feel right.

He continued: "It's very difficult to describe what depression is. We all know what it looks like. People's moods become very black. But it's more complicated. It changes someone's personality.

"He lived, in the end, this very lonely existence of someone who was deeply troubled. I saw someone who became increasingly confused, desperate and depressed."

Despite the fact that Emerson's girlfriend said the musician was "tormented with worry" over how his degenerative disease affected his playing ability, Lake doesn't believe that was the main reason behind his decision to end his life.

Lake said: "I'm sure that was a component — but a lot of people are given bad news like that, and you don't take your life because of it.

"If anyone does have feelings of being so desperate that they think it's better off not to wake up tomorrow, please talk to somebody. The doctor, your friend, anybody.

"Talk to them and tell them what state you're in. If Keith had taken that path, he might still be here today."

Palmer said in a statement that he was "deeply saddened to learn of the passing of my good friend and brother-in-music." He also vowed to "put together a tribute show to Keith, hopefully in June this year. This, I feel, is the very least I can do to honor Keith's talent and musicianship."

EMERSON, LAKE & PALMER reunited for one last tour together in 2010. Their final gig took place in July 2010 at London's High Voltage festival.