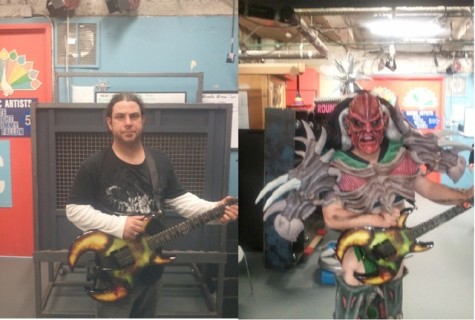 GWAR frontman David Brockie — better known to the band's legion of fans as the alien overlord Oderus Urungus — was recently interviewed for Full Metal Jackie's nationally syndicated radio show. You can now listen to the chat using the audio player below.

Cory, who had played the character of Flattus Maximus for over ten years, was discovered dead on the band's tour bus on November 3 of this year. He was 34 years old.

The band, which will continue as a four-piece until the current tour schedule is complete, has officially retired the character of Flattus Maximus, and has announced no plans regarding a new GWAR-tarist.

Brockie told the Daily News that he knew his friend definitely wasn't the hard-partying type who'd end up a heavy metal drug cliché.

"For a rock and roll musician to die on a bus on the way to a border crossing ... there was a real breath of relief that rippled through the metal community when we found out it was a normal death," he said.

Brockie and his bandmates returned to the stage — in Edmonton, Alberta, Canada — just 36 hours after Smoot's passing — because it kept their minds off the fact that Smoot's body was stuck in a morgue in North Dakota for almost a week, not being released to Cory's wife, Jamie, until the coroner fully examined the body.

"We went out there to do the soundcheck and it was just on," said Brockie of the Edmonton show. "All of a sudden, we had a new appreciation for everything.

"Because he's not here, we’re going to have do everything a million times better than we've ever done before. The audience wasn't just going to let us fail."

He added, "[Cory] will always be a part of our band. As I'm talking to you, I'm sitting here staring at a plaster cast of his head.

"In his short 34 years, he had a huge impact. It'll take a long time to get the credit he deserves, because he was wearing 40 pounds of rubber and makeup when he played."

Metal Blade and GWAR have since set up the Smoot Family Foundation to raise funds for Cory's wife, Jaime, and their unborn child. Donations can be made here.

MENSREA, CANNABIS CORPSE and DAVE BROCKIE EXPERIENCE are among the artists who will perform at the upcoming Cory Smoot memorial concert, set to take place on Saturday, January 7, 2012 at The Canal Club in Richmond, Virginia.

Smoot joined GWAR in 2002 and first appeared on the band's 2004 album "War Party". He was the fifth guitarist to play the character of Flattus Maximus, known by his red face, white dreadlocks, dinosaur-head shoulder pads and reptile feet.

Born August 25, 1977, Smoot previously played in metal bands MISGUIDED and LOCUS FACTOR and continued to play with MENSREA, in addition to establishing his own solo project, THE CORY SMOOT EXPERIMENT.