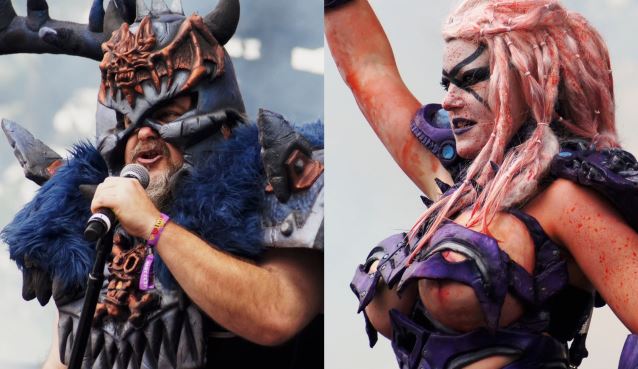 GWAR, the most brutal band in existence, has bolstered its ranks leading up to the "GWAR Eternal Tour". The Berserker Blóthar and Vulvatron are the latest intergalactic warriors to be banished to the pathetic mudball known as Planet Earth.

Blóthar; a fat, filthy, frozen space viking, will take over as GWAR's lead vocalist. The role of the red-hot cybernetic spitfire known as Vulvatron is more mysterious... Both will feature prominently in the anticipated "GWAR Eternal Tour" — which promises to be the most shocking and entertaining rock show of the year! Get to know your new masters before they grind you to a bloody pulp!

Origin: The Berserker Blóthar is an ancient shape-shifting holy warrior from the planet Scumdoggia. Blóthar is known to associate with intergalactic outlaw biker gangs

Features: Blóthar wears a ceremonial headdress fashioned from the gigantic antlers and pelt of a Spectral Moon Moose he killed eons ago. He carries a mighty battle axe, an impenetrable shield, and for some reason has grown a set of hideous space udders

Quote: "I went into a trance of blinding rage. I must have killed a million space apes. I was sleeping it off, and I woke up with a piss boner. I figure, why waste it, you know? So I'm rubbing one out, and the next thing I know, I'm on stage with GWAR in front of thousands of hideous, acne-ridden teenaged humanoids. I was promised there would be wifi, but it's hit or miss...."

Size: Genetically engineered to the optimum proportions for a female of her species

Origin: Vulvatron has returned from the year 69000, where she was a high-ranking Scumdog assassin in the battle against futuro-fascist forces. Her primary functions include mastery of the arts of war, quantum mechanics, and intergalactic musicology

Quote: "I have summoned Planck quantities of energy to navigate the fabric of space-time back to this primitive era on Earth. I believe our wormhole might have slightly malfunctioned upon my arrival, also ushering in a primeval creature from a far earlier era, vaguely resembling a Moon Moose. I shall have to report this anomaly to maintenance. My mission is to alter the current path of GWAR so that they might prevent the darkest period in the history of the Universe! I have calculated an optimum plan of action to achieve...Hey! Quit staring at my tits!"

See the Berserker Blóthar, Vulvatron and the rest of GWAR as they embark upon the "GWAR Eternal Tour" and search for Oderus Urungus! 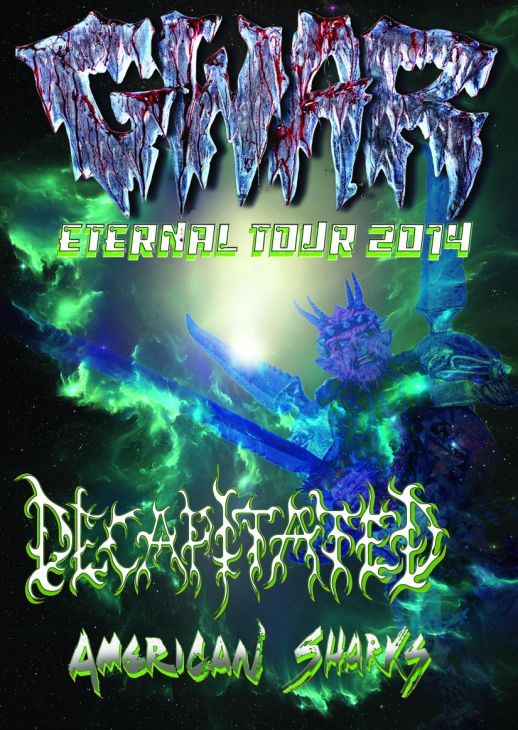