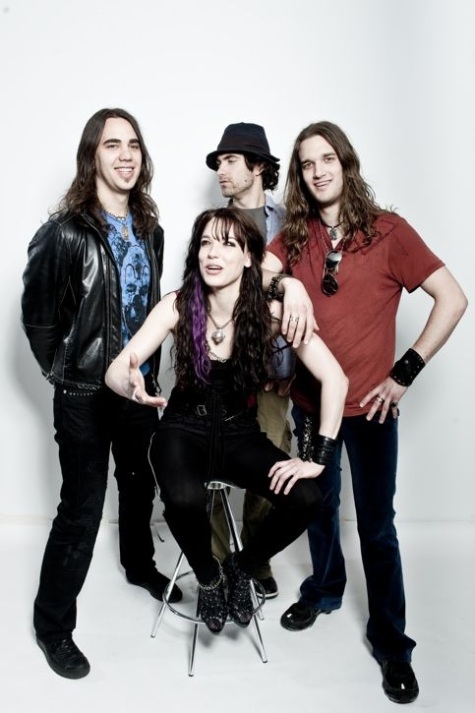 Video footage of the Atlantic recording group HALESTORM talking about the inspiration behind their new single, "Love Bites (So Do I)", can be seen below. The song comes off the band's new album. "The Strange Case Of…", which arrives in stores and at all DSPs on April 10.

"Love Bites (So Do I)" — as well as three other highlights from "The Strange Case Of…" — is featured on HALESTORM's new EP, "Hello, It's Mz. Hyde", which is available at all leading digital retailers.

HALESTORM will hit the road hard to support "The Strange Case Of…", beginning with a major U.S. trek alongside GODSMACK and fellow Atlantic recording group STAIND. The dates get underway April 13 at Augusta, Georgia's John Paul Jones Arena and then continue through mid-May.

"The Strange Case Of…" marks HALESTORM's first release since last year's "ReAniMate: The CoVeRs eP", which saw the band putting their unique stamp on a diverse collection of classic songs, including tracks by GUNS N' ROSES, THE BEATLES, HEART, TEMPLE OF THE DOG, SKID ROW, and LADY GAGA. HALESTORM also unleashed their first-ever live CD/DVD, "Live In Philly 2010", featuring such favorites from the band's self-titled debut as "It's Not You", "Familiar Taste of Poison" and the rock radio smash "I Get Off".