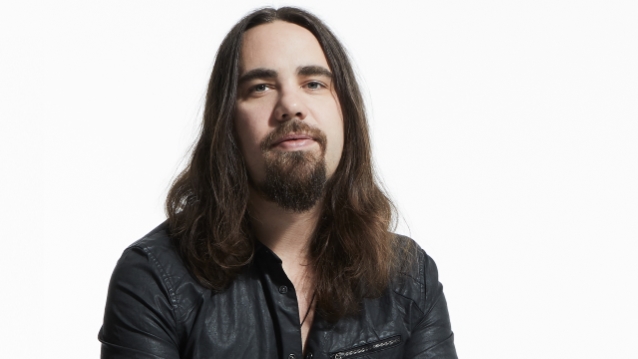 HALESTORM's JOE HOTTINGER: 'It's Unprecedented Times For All Of Us Alive Today'

In a recent interview with Ernie Ball's "Striking A Chord" podcast, HALESTORM guitarist Joe Hottinger spoke about how he is dealing with the coronavirus crisis and what the touring circuit might look like post-pandemic. Asked for his opinion of the state of the music industry right now, Joe said (hear audio below): "What music industry? [Laughs] It's crazy. It's chaos and upheaval in a really strange way — a very passive way. Obviously, everyone is streaming things now, which is cool. It's neat to be able to see some artists singing some songs live kind of in the moment. It doesn't even come close to the live show experience, but it's neat. It's unprecedented times for all of us alive today. And it's weird. So it is kind of comforting to hear that stuff and to be able to feel a little more connected to people.

"We've gotten really busy, which I thought was strange," he continued. "We're just doing lots of streaming things and interviews. It's a trip. It's kind of neat in the sense that we're connecting with people. I think there's a reckoning happening with a lot of people and a reset happening. I know it's happening in my life — I feel like I'm kind of resetting how I'm living, or how I was living. And it's an opportunity to start over. In the music business, I don't know what that startover is gonna be like. It's crazy. It's part of an ongoing discussion happening right now."

Joe also talked about how HALESTORM's touring plans have been affected by the coronavirus crisis.

"I'm kind of still mentally preparing myself for the lean months ahead… I have a feeling this is gonna last the whole year and we won't be able to play another show till next year," he said. "I hope not, but I'm kind of preparing myself for that. And that's insane — we haven't gone a year without playing a show in probably 20 years. That's like our drug, our favorite thing to do ever — play rock shows. The streaming thing is a little touch or a hit of it, but it's not the same."

Asked if HALESTORM is relying on merchandise revenues to survive during the months when the band is not on the road, Joe said: "We're not a huge online merch band. It does all right, but it's not the kind of money that's gonna keep you afloat.

"We're lucky, man — we've had such a lucky career. We've busted our ass getting to where we are, and we're gonna be all right. We're trying to keep our crew afloat, 'cause they're not gonna be working this year. We're doing what we can.

"I think it's lean times, and I think that's gonna be one of the most interesting things to come out of this whole scenario," he added. "I think there's gonna be a new music business, and I don't know what it's gonna be exactly, but people are getting creative. People are doing live shows online; CODE ORANGE is doing some really cool stuff. I don't know what we're gonna do. We're talking to our management right now, trying to figure out what the next steps in this life are."

HALESTORM frontwoman Lzzy Hale and her brother Arejay (drums) formed the band in 1998 while in middle school. Hottinger joined the group in 2003, followed by bassist Josh Smith in 2004.