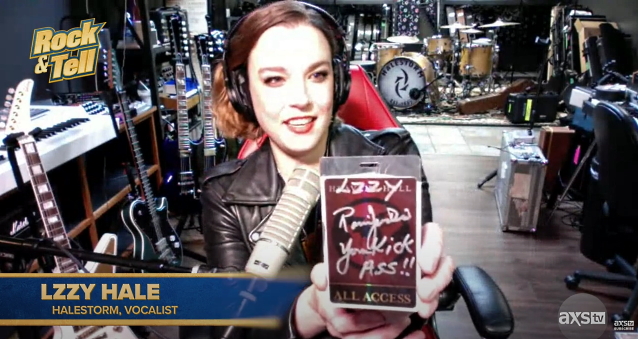 In the latest episode of AXS TV's "Rock & Tell", HALESTORM frontwoman Lzzy Hale shares her rock and roll collection and the stories behind them. Among the items Lzzy discusses are a laminate signed by Ronnie James Dio when HALESTORM opened for HEAVEN & HELL in 2009, and the Grammy AwardHALESTORM received in 2012 in the category of "Best Hard Rock/ Metal Performance" for "Love Bites (So Do I)".

Earlier in the month, HALESTORM released a new single, "Back From The Dead". The track is taken from the band's upcoming fifth full-length album, due in 2022. An accompanying video for "Back From The Dead", which was directed by Dustin Haney (Noah Cyrus, Luke Combs) and produced by Revolution Pictures, features Lzzy and her bandmates in a morgue and cemetery somewhere between life and death.

In December 2018, HALESTORM was nominated for another Grammy, this time in the "Best Rock Performance" category, for its song "Uncomfortable".

According to the Grammy web site, HALESTORM's award for "Love Bites (So Do I)" marked the first time a woman earned a Grammy in the category.