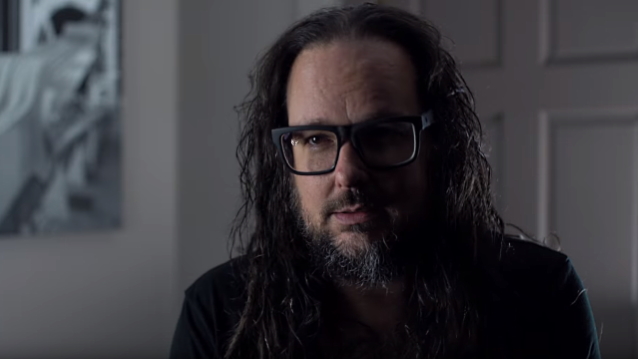 On the latest installment of "Sing For Science", out now via the Talkhouse podcast network, the podcast shows it is ready to entertain and answer the most morbid of curiosities. In an episode titled "Dead Bodies Everywhere: Postmortem Biology And The Curious Lives Of Human Cadavers", "Sing For Science" host, creator and musician Matt Whyte puts legendary KORN frontman Jonathan Davis in conversation with best-selling pop science writer Mary Roach ("Stiff: The Curious Lives Of Human Cadavers"),to discuss mortuary science and demystify the macabre. The interview is centered around KORN's song "Dead Bodies Everywhere", off the band's 1998 album "Follow The Leader" — which sold over 14 million copies and was partly based on Davis's own experience working in a morgue prior to forming KORN. Just a junior in high school when he began doing post-mortems out of the coroner's office in his hometown of Bakersfield, California, Davis went on to study at San Francisco's College Of Mortuary Science, where coincidentally, Roach also attended. Driven by a need to shed light on the darker parts of life, Davis and Roach share a deep interest in America's death-denying culture, using "Sing For Science" as a platform to launch into these subjects without fear, and instead with a sharp focus on the realities of death, and music as a means of reckoning with some life's biggest questions.

At the beginning of the episode, Davis describes living in an apartment attached to the mortuary where he worked, and shares that the inspiration for the song "Dead Bodies Everywhere" was the need for more workspace causing an overflow of body parts right into the singer's kitchen. Similarly, Roach walks through the fieldwork that went into writing her best-selling nonfiction work "Stiff: The Curious Lives Of Human Cadavers", with stories from visiting morgues, to crash tests with cadavers, to body farms and beyond. As "Sing For Science" comes face-to-face with death, it dares to look more closely at the lived experience and expertise behind mortuary practices, and those who specialize in the subjects our culture leaves unacknowledged or ignored. Like any episode of the "Sing For Science" podcast, this morbidly fascinating conversation doubles as a life-affirming call to action, challenging us all to decipher our relationships with death to better understand what it is to be alive.

In a 2019 interview with NME, Davis spoke about his interest in serial killers and the paranormal, saying: "I've just always been drawn to the dark stuff. As I've got older, I've started to understand the importance of balance. My house, which is full of some fucking crazy dark things — is actually quite a peaceful place. People always say that when they come to visit. There's a good balance between light and dark. For me, peace is that fine line between the two. But I can't deny that I haven't always be fascinated by really dark things, although as a person I think I come from a place of light.

"I'll see things in the corner of my eye in my house," Davis said. "I'll just be, like, 'Oh, hey,' because at this point they're there all the time. There's bangs on my walls all the time. Shit flies off the walls. At this point it doesn't even scare me, they're just there. All I wish for them is peace. I wish they could cross over. I was scared when I was a kid."

The KORN vocalist also talked about the "creepy shit" he owns, saying: "I have the remains of at least seven people in my house. I've got shrunken heads. Skulls. I've got swords that have been used to decapitate people. I have a huge haunted doll collection. I've got them from all over the world and they've all got different stories, which I find fascinating. I get them from antique shops. I like giving them a home! I know a few owners at various places and they'll normally give me a tip off if they get something in that they think I'll like. I mean, you can feel shit in these dolls. You get up close and it's in them. So I take them home and put what I've bought with the other dolls. I had a spiritual barrier made with certain stones and sage that fences them off and protects me."

"Sing For Science" is a science and music podcast produced with Talkhouse where musicians talk to scientists about science as it connects to their most famous songs. Created and hosted by New York musician Matt Whyte, the podcast's goal is to increase science literacy for as many people as possible by reaching a variety of different musicians' fan bases. Listeners come to the show through their love of music and leave with a new piece of knowledge about science and the scientific process. Science literacy and respect for expertise are perhaps more vital now more than ever before. The show's chief tenet is that a more science and scientific process literate society can only contribute towards greater support for more fair, evidence-based policy in government.