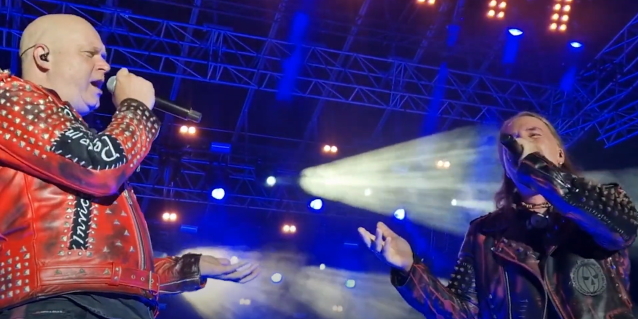 HELLOWEEN frontman Andi Deris spoke to Ecuador's Telón De Acero radio about how he and his bandmates have managed to pull off the seemingly impossible by uniting returning singer Michael Kiske and guitarist/vocalist Kai Hansen with Deris, guitarists Michael Weikath and Sascha Gerstner, bassist Markus Grosskopf and drummer Daniel Löble. He said (as transcribed by BLABBERMOUTH.NET): "I may say [Michael and Kai] are friends now. I didn't know them, actually [before we got together to discuss their return to HELLOWEEN]. [Laughs] In the beginning, it was… To be honest, I did not know what to expect. I didn't know Kai, I didn't know Michael, and we just sat around the big round table and everybody was sniffing at each other's ass, like dogs. But, hey, we liked each other. So we just were scared that this is something like in the beginning you feel it's a cool guy and after you work with him, you think it's an asshole, or something like that. So you never know. So with the time, we learned to very much respect each other and like each other. And I can say with Michael Kiske, I found a definitely long-, long-, long-missed friend for my life. And we just are both a bit angry that we didn't get to know each other way earlier, because two singers who tick in the same rhythm could have been quite a great thing in my life the last 20 years. So I'm happy to have him now. And I may say that because you guys, you all know I'm not gay. [Laughs]"

Deris elaborated on the interpersonal chemistry between all the members of the reunited expanded classic lineup of the German power metal band. He said: "There are seven pumpkins, and each and every pumpkin is a character. And each and every day is different. Because we are so, I think, super-crazy characters that each and every day there's another story going on. So it's something you may be thrilled about and you wait what's happening next; you never know in this band. But because I think everybody at least likes each other and respects each other, I think this is something that you… When we're not making music anymore, you'll probably looking back into that time and say this was the greatest time of my life, because it was thrilling and every day something different was going on.

"One month touring with HELLOWEEN is like a year [laughs] — so many things happen and so many talks we have," Andi added. "So, yeah, it's super great being together with the guys because of that. It's no boring thing going on. I mean, look at Markus [Grosskopf] — Markus is a party animal, our bass player. There's not one day you're not laughing your ass off because he's so crazy. Then you've got our drug lord Kai. He's always in for a surprise. And you go, like, 'Oh my God.' Or you go, like, 'Woo hoo hoo,' or whatever. There's a lot of crazy people in the band. I just wonder that it works. [Laughs]"

Upon its release in June 2021, HELLOWEEN's latest, self-titled album landed in the Top 10 in more than 10 countries, including Germany, Spain, Finland, Sweden, Switzerland and Austria. The cover artwork for the LP was painted by artist Eliran Kantor, who has previously worked with HATEBREED, SOULFLY, TESTAMENT, ICED EARTH and SODOM, among others.

Produced by Charlie Bauerfeind and Dennis Ward, "Helloween" was recorded in part at the H.O.M.E. Studios in Hamburg (where everything started in 1984). The same recording console used for such HELLOWEEN albums as "Master Of The Rings", "Time Of The Oath" and "Better Than Raw" was utilized to record the band's new material. The effort was mixed at the Valhalla Studios of Ronald Prent (IRON MAIDEN, DEF LEPPARD, RAMMSTEIN).

"Helloween" saw the legendary German power metallers going "back to the roots," with the band recording fully analogue and Daniel Löble playing the drum kit previously used by HELLOWEEN's original drummer, the late Ingo Schwichtenberg, on the legendary "Keeper Of The Seven Keys" recordings.

Earlier this year, Deris told the "Metal Command" podcast that he "strongly" hoped the reunited expanded classic lineup of HELLOWEEN would eventually make another album to follow up "Helloween". "I mean, as long as the vibe is great, chemistry is great and everybody's having fun with each other, it would be a crime not to do so and not to plan for a future together," he said.