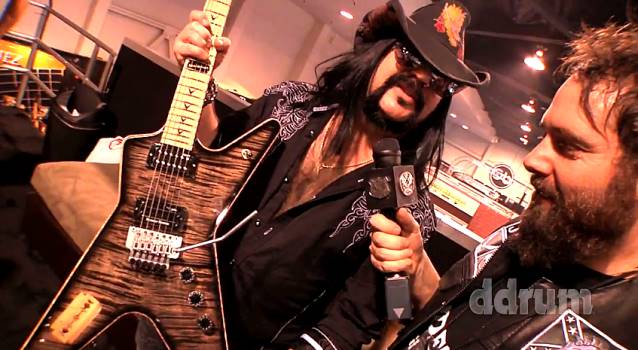 HELLYEAH's Fourth Album Pushed Back To May

Drummer Vinnie Paul Abbott (HELLYEAH, PANTERA, DAMAGEPLAN) was interviewed by ddrum at this year's NAMM (National Association Of Music Merchants) show, which was held January 23-26 at the Anaheim Convention Center in Anaheim, California. You can now watch the chat below.

Asked about the current status of HELLYEAH, Vinnie Paul said: "The new HELLYEAH record's done. It was completed last week. It comes out May 15. Our touring starts April 12 — a big show in Phoenix with AVENGED SEVENFOLD, which is gonna be amazing. And I'm just looking forward to some good stuff next year, man. You'll be seeing me all over the United States, Canada, Europe, Japan, South America, Australia… We're coming to see you. 2014 is the year of HELLYEAH!"

HELLYEAH's fourth studio album will be released via Eleven Seven Music. The CD was helmed by producer Kevin Churko at his The Hideout Recording Studio in Las Vegas, Nevada. Churko is the Canadian musician, sound engineer, songwriter and record producer who has previously worked with OZZY OSBOURNE, FIVE FINGER DEATH PUNCH and IN THIS MOMENT, among other acts.

Abbott called the band's new material "heavy and diverse" and promised that the album would contain HELLYEAH's "very best" music to date. He added: "It was an honor working with Kevin. He really pushed and got the best out of us. Everything we did on this record was from a different perspective."

"Band Of Brothers" sold 19,000 copies in the United States in its first week of release to debut at position No. 19 on The Billboard 200 chart.