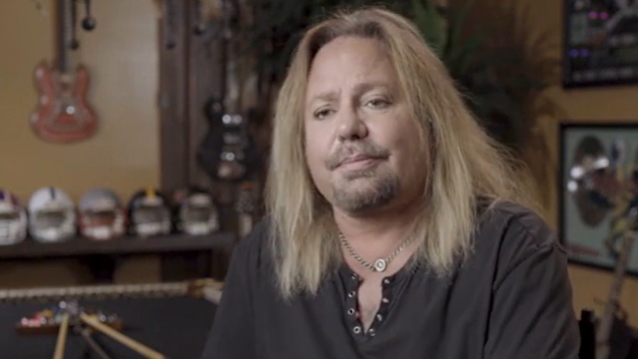 The first trailer for the upcoming two-hour documentary "Mötley Crüe's Vince Neil: My Story" is available below.

"Mötley Crüe's Vince Neil: My Story" will premiere on Sunday, June 26 at 5 p.m. PT / 8 p.m. ET on Reelz. In his own words, Neil will give viewers exclusive insight into his wild ride to fame and his many bumps in that road. With candid and raw interviews of never-before-heard stories, Neil details what led him to music, the formation and early days of MÖTLEY CRÜE, surviving his hardest party days and how he navigated the road to super stardom. Neil also gets incredibly candid about his much-publicized setbacks — from the heartbreak of losing a young child to being arrested for driving under the influence after causing a crash that killed his friend, HANOI ROCKS drummer Nicholas "Razzle" Dingley. Sharing their stories of Neil are those closest to him, including his son and daughter, bandmates Tommy Lee and Nikki Sixx, SLAUGHTER's Dana Strum, journalists and rock historians and others who have been a part of his story through today.

Back in June 2019, Neil and Sixx both slammed an episode of the Reelz documentary series "Breaking The Band", which focused on the history of their band.

Neil complained on social media about the way his 1992 exit from CRÜE was portrayed in the documentary. The split happened after an argument between him and the other members of the band which the singer claims should have been defused by CRÜE's manager at the time, Doug Thaler. When Neil's departure was announced a short time later, the reason CRÜE gave for his dismissal was that Neil's motor racing had "become a priority" in his life. "His bandmates felt he didn't share their determination and passion for music," they said in a statement.

After viewing "Breaking The Band", Vince took to his Instagram to write: "Breaking the band, fucking memories from a manager Doug Thaler who can't remember that he's the one who actually broke up the band! The band didn't break up because of me racing. It broke up because he was too much of a pussy who didn't just say, 'Hey guys, let's take a week off and come back with cooler heads.' He called me an hour later and said I was out of the band! Great management!"

Neil continued: "What he didn't say was, instead of me going racing I put out a top 10 single with 'You're Invited' — oops he forgot! Then an album called 'Exposed' — oops, forgot again! No wonder he was fired shortly after."

Sixx tweeted his disapproval over the Reelz episode, writing: "Breaking the Band was not authorized by MÖTLEY CRÜE. Our lawyers sent them a cease-and-desist and further action will be taken. @ReelzChannel Is the bottom of the barrel." He added in a separate tweet: "Should @ReelzChannel be liable for putting out shows without so many artist approval? I am very disappointed that they think they can tell our LIFE story just to sell advertising ( mostly incorrect ) and without any bodies permission."

The decision to split with Neil was made on February 10, 1992 in the midst of a massive rainstorm over Los Angeles, Sixx, drummer Tommy Lee and guitarist Mick Mars sat impatiently waiting for Neil to arrive for a rehearsal.

In CRÜE's band biography "The Dirt", Sixx said that Neil's drinking was at least partly to blame for the singer's exit. "Except for Mick, we were all slipping off the wagon, but Vince was the only one who was letting it affect his work," he wrote. "By the time he arrived, the seed was already planted in our minds that he was holding us back."

Neil rejoined CRÜE in 1996 after the band released a 1994 self-titled album that featured John Corabi on lead vocals.

MÖTLEY CRÜE's "The Stadium Tour" with DEF LEPPARD, POISON and JOAN JETT & THE BLACKHEARTS was originally scheduled to take place in the summer of 2020, but ended up being pushed back to 2021, and then to 2022, due to the coronavirus pandemic which is sweeping the globe.

"The Stadium Tour" marks the CRÜE's first live dates since wrapping its 2014/2015 farewell tour. CRÜE toured with POISON back in 2011 and DEF LEPPARD teamed up with POISON for a string of road dates in 2017 — but the current jaunt marks the first time all four acts have hit the road together for an extended tour.

MÖTLEY CRÜE's 2019 biopic "The Dirt" depicted Neil's 1984 drunk-driving accident that killed Dingley and seriously injured two others. Neil was charged with vehicular manslaughter and driving under the influence of alcohol. His blood alcohol level was 0.17, which was over the legal limit. Neil served half of a 30-day jail sentence, received five years probation and had to pay $2.6 million in restitution, as well as perform 200 hours of community service.

Back in 2011, Neil served 10 days of a 15-day DUI sentence in connection with a June 2010 incident when he was speeding and weaving between lanes on Desert Inn Road west of Paradise Road, near the Las Vegas Strip, authorities said.

"The Dirt" biopic also showed Neil's firing from MÖTLEY CRÜE in 1992, only for his bandmates to rally behind him in 1995 when his four-year-old daughter, Skylar, died of cancer. (He rejoined the group in 1997.)