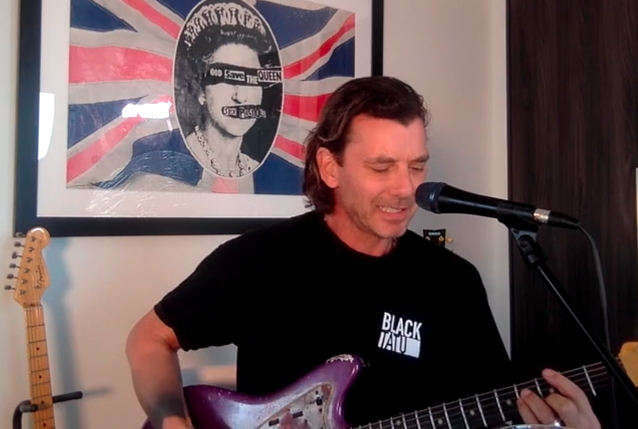 Earlier today (Tuesday, March 31),BUSH frontman Gavin Rossdale took part in Billboard's new "Live At-Home" series where artists perform some of their biggest hits from the comfort of their own homes. During his set, Rossdale raised funds for the United Nations Foundation to support their fight against the spread of COVID-19.

Video footage of Rossdale's performance can be seen below.

The band recently released a music video for the latest single, "Flowers On A Grave".

"We are really proud of 'The Kingdom'," Rossdale said. "It's as if all roads traveled over the last few years have gotten us to this point. We look forward to this cycle — old fans, new fans, likeminded people who are searching for their kingdom."

The pensive and pummeling "Flowers On A Grave" is the dynamic follow-up to BUSH's cinematic "Bullet Holes", heard by audiences all over the world atop the end credits to the international blockbuster "John Wick: Chapter 3 - Parabellum". Produced by Tyler Bates, "Bullet Holes" will also be featured on "The Kingdom".

I’m Gavin Rossdale and I’m teaming up with Billboard to raise money for United Nations Foundation with a Billboard Live At-Home performance! ️🏡 Watch now and drop your questions, requests and donations below!