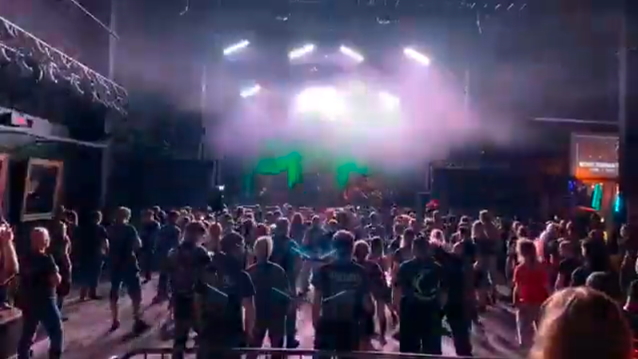 Here Is What DESTRUCTION's First 'Socially Distanced' Concert Looked Like

**UPDATE**: The original version of this article incorrectly stated that DESTRUCTION only played one show — on Saturday (July 4) — in front of a less-than-sold-out crowd. DESTRUCTION frontman Schmier has since informed BLABBERMOUTH.NET that two concerts were held, with Friday's (July 3) show drawing 250 people and Saturday's gig — which actually went on sale first — attended by a capacity crowd of 300 fans.

German thrashers DESTRUCTION played their first two concerts after the coronavirus pandemic closures on Friday (July 3) and Saturday (July 4) in Pratteln, Switzerland. In response to COVID-19 restrictions, only 300 tickets were made available for each show at the 1,600-capacity Z7 club. According to DESTRUCTION frontman Schmier, 250 people attended Friday's gig, and 300 fans were present at last night's show.

A couple of weeks before the Z7 concerts, Schmier spoke to Anne Erickson of Audio Ink Radio about the prospect of playing shows amid the pandemic. He said: "It feels a little bit surreal. Nobody expected this to come back so quick, but we're in the lucky position to live on the Swiss border, and Switzerland is far ahead of all the other countries … And there are very little corona cases, so that will be an interesting experience… It's going to feel weird to play a show again, because this is the first time in 20 years that we didn't play a show in three months. It's the longest time ever. It's very exciting, of course. We look forward to playing again, but it's going to feel a little weird, for sure."

Schmier also expressed his optimism about the prospect of additional live events in the coming weeks.

"What we're experiencing now is the first trial of concerts, and Switzerland, also, is far ahead, so the whole world will watch the country and see the developments. So, it's going to be interesting, and hopefully we're not going to get hit hard again, but the way things go at the moment, it looks good. Switzerland is open just a couple of weeks already. In Germany, we're still wearing masks when we're going grocery shopping and stuff, but in Switzerland, there's no masks needed anymore."

In a separate interview with The Metal Voice, Schmier said that he is not interested in performing drive-in concerts during the coronavirus crisis. "I'm not playing for cars," he said. "It's wrong — it's just wrong. If this is the last step to do — to play live shows in front of cars — I might think about it. But at the moment, no way — it's not working for metal. Metal people have to move, and we wanna feel the bass. This auto concerts, the music is on your radio, on your stereo in your car. There's no P.A. system. It's not a live impression, really. You're sitting in your car.

"I understand people doing this now, because people are desperate," Schmier added. "But [it's] not for DESTRUCTION. We had the offer to do this, actually, but I don't wanna rip my fans off with shit like this. I'm sorry."

As the coronavirus disease continues to spread, live event organizers have been canceling or postponing large gatherings, including concerts and festivals.

Two months ago, DESTRUCTION delivered a treat for fans stuck at home and unable to attend live shows: "Born To Thrash - Live In Germany", the band's first live album with the current lineup, is out now digitally on all streaming and download platforms.

DESTRUCTION's latest album, "Born To Perish", was released in August 2019 via Nuclear Blast.

Destruction on stage as we speak at the legendary Z7 in Pratteln, Switzerland! 🔥

Posted by Destruction on Saturday, July 4, 2020