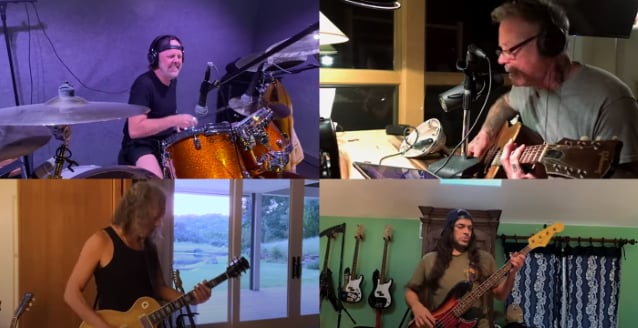 How METALLICA's Quarantine Version Of 'Blackened' Came Together

On August 27, the four members of METALLICA joined SiriusXM's Jose Mangin for a virtual roundtable chat on Zoom to talk about everything from the "Metallica And San Francisco Symphony: S&M²" release and the drive-in event to welding tables and making jam. Speaking about how he and his bandmates overcame social distancing in May to record a new version of their song "Blackened", with each member separated in his own home, frontman James Hetfield said (see video below): "It was one of those things where we were having our weekly 'TALLICA Zoom sessions and were just talking about, 'What can we do? Let's do something. Let's explore trying to layer something. I'll send you guys something. I'm not gonna tell you what it is, 'cause I don't know what it is.' So I was just sitting at home and messing around, and I sent it off, and Lars [Ulrich, drums] threw some stuff on it, he sent it to Kirk [Hammett, guitar], Kirk sent it to Rob [Robert Trujillo, bass]. Then, all of a sudden, we had a guy kind of mix it and put the video thing together. So it was super organic and out of just sheer need and want to create, and create something different. So I had a lot of fun doing it.

"I'm grateful that, obviously, if there wasn't this kind of quarantine thing, something like that wouldn't have happened," he continued. "You kind of lean into the uncomfortable, lean into that place where you haven't been before, and it helps you grow, man."

Added Ulrich: "It was super fun, because James didn't tell any of us what he had done. And so I was second. I pressed 'play,' and, 'What am I gonna hear now?' And that was super fun, and so unlike our normal work processs. I just played the first thing that came into my mind, and I had one of my kids film. Okay, film what you're doing on the iPhone, play, and then off to Rob. And, like James was saying, Greg [Fidelman, producer] was the switchboard operator down in L.A. kind of making it all happen on the practical side. And it just came together so organically, and it was such a fun thing and such a gift. And to be able to turn that around in a week, or whatever we did, and then share it with all the fans out there and feel that something beautiful had come out of this surreal and difficult time was a great thing."

This past weekend, METALLICA broadcast a show to hundreds of drive-in and outdoor theaters across the U.S. and Canada, as part of the "Encore Drive-In Nights" series. The drive-in concert was shot three weeks earlier in Northern California and was subsequently edited and mixed by the band's award-winning production team to the highest standards possible.

METALLICA had been largely out of the public eye since last fall when the band canceled an Australian tour and announced that Hetfield was returning to rehab for the first time since 2002 to battle his addictions.