"We have just finished recording three songs intended to be demoed for Napalm [Records]. As you know, we have done two albums for them and are under option for two more. We are really looking for things to pick up this time around, and we think we have put some things in place to see that happen. First off, the new songs. 'Antichrist Conceived', 'So Fell Lord Perth' and 'Suffer the Wreck' — these songs are still HURTLOCKER but a bit of a departure from the old ways. I think being this is the first album where the lineup is the same as the last that we have grown and matured in the songwriting process. You'll hear that on 'Lord Perth'. We are just writing better and functioning better as a group. Either way, we are proud of these three and are looking forward to the whole album. We are in writing mode right now and are working hard on new songs daily."

He continued: "We are trying to finish up one tune now because it's the tune Peter from VADER will be on, and he needs it by mid-March because he'll be in the studio anyways. With that being said, we also have Leif from DEW-SCENTED and Sven from ABORTED signed up to do guest vocals, as well. These guys are friends of ours, and we were stoked when they agreed to lend their vocals to the new album. Peter actualy tour-managed for us on the Domination tour way back at the begining of our Napalm career."

HURTLOCKER has released two albums through Napalm Records thus far — 2006's "Fear in a Handful of Dust" and 2007's "Embrace the Fall".

HURTLOCKER was recently rejoined by Grant Belcher. In addition, the band has recruited a new bassist in the shape of Pat Neary (formerly of THE WAKING). 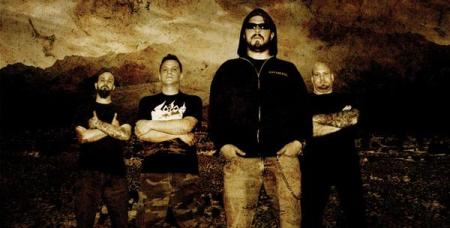