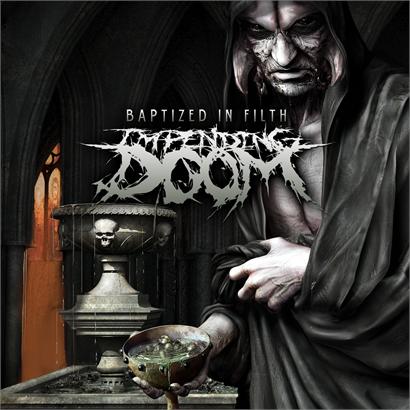 Behind-the-scenes footage from the making of "Baptized In Filth", the fourth full-length album from Riverside, California-based Christian death metallers IMPENDING DOOM, can be seen below. Due on March 13, the CD was produced by Andreas Magnusson (THE BLACK DAHLIA MURDER, THE FAMINE) and was mixed by Machine, who has previously worked with LAMB OF GOD, SUICIDE SILENCE and DEMON HUNTER, among others.

Commented bassist David Sittig, "'Baptized In Filth' represents the mindless indulgance and self-worship in the vile world we live in. This album is meant to scare the hell out of you!"

The official lyric video for the new IMPENDING DOOM song "For The Wicked" can be seen below.

IMPENDING DOOM will take part in the Metal Alliance Tour 2012 alongside DEVILDRIVER, THE FACELESS, DYING FETUS, JOB FOR A COWBOY and 3 INCHES OF BLOOD.

IMPENDING DOOM's third full-length album, "There Will Be Violence", was released on July 20, 2010 via Facedown Records.