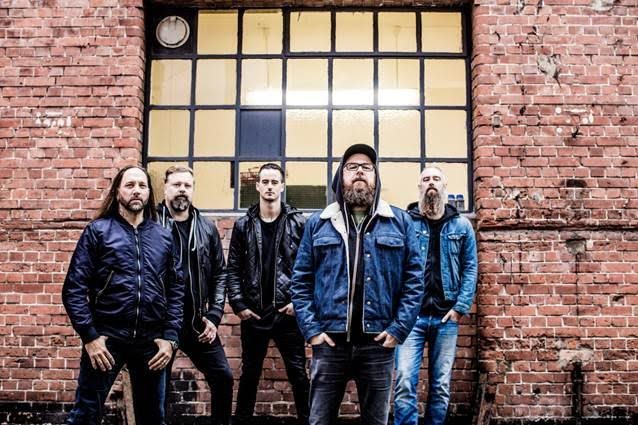 IN FLAMES Releases Animated Video For 'Here Until Forever'

"Here Until Forever", the new video from Swedish metallers IN FLAMES, can be seen below. The stunning animated clip, directed by award-winning Mexican filmmaker Luis Téllez, is a masterclass in stop-motion animation.

"Here Until Forever" is taken from IN FLAMES' latest album, "Battles", which was released last November via Nuclear Blast in all territories excluding North America and Scandinavia and Eleven Seven Music Group in the U.S. The CD was recorded in Los Angeles with Grammy-nominated producer Howard Benson, who has previously worked with MOTÖRHEAD, BODY COUNT and SEPULTURA, among others.

IN FLAMES singer Anders Fridén told FaceCulture that "Here Until Forever" was written for his son. The vocalist explained: "He's eight years old. I have this piece here, 'Come Clarity', which I wrote for my daughter when she was two. And he's seen that, and he asked all the time, 'Daddy, where's my song?' And I don't think I'd been ready to write something that would make him justice. But now… yeah, I was ready. So that one is, obviously, the most personal one, because it's very directed towards one person, for me. But I think the lyric is open for interpretation; it could be for anyone — someone that you love, or someone that you missed, or someone that you have a special bond with."

Asked if his son has heard "Here Until Forever" and what he thought of it, Anders said: "He heard it. I think he cried the first time [he listened to it], 'cause he was so proud: 'This is about me.' And it's an important track, because we… You know, we are away [from each other] many months a year, and we have a little thing, me and him, for how we connect… If he feels sad and he wants to contact me, then we have a certain thing that I taught him to… so he feels safe."

He continued: "I think he's super proud of that song. And then he can tell his friends, 'This is my song.' Stuff like that."

IN FLAMES has recruited Bryce Paul — a member of the Southern California pop-rock outfit IVES — to play bass for the band on their current U.S. tour, which includes a number of headlining shows and festival appearances.

Longtime IN FLAMES bassist Peter Iwers quit the band in November saying that he was leaving IN FLAMES "to pursue other endeavors." His replacement for some of the recent European shows was Håkan Skoger, who had previously played with PASSENGER and GARDENIAN.