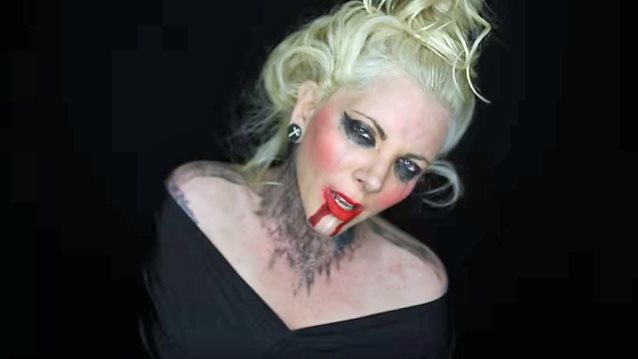 IN THIS MOMENT's 'Blood' Album Certified Gold In U.S.

IN THIS MOMENT's 2012 album "Blood" was certified gold for sales of half a million units on May 10 by the RIAA (Recording Industry Association Of America).

In February 2016, the RIAA began including on-demand audio and video streams and a track sale equivalent in determining which releases get the coveted album awards, a change that followed a similar tweak in 2013 to include on-demand streams for its Digital Single Award.

As part of the new rules, 1,500 streams count as an album unit. This move came on the heels of its 2013 alteration to its Gold Single award where it announced that 100 streams would count as a single download, and in January 2016 had upped that ratio to 150 streams in recognition of how streaming had grown.

"Blood" reached No. 15 on the Billboard album chart, while the title track — which itself was certified gold in March — became IN THIS MOMENT's first-ever Top 10 hit at rock radio.

IN THIS MOMENT guitarist Chris Howorth said: "Maria [Brink, vocals] and I are grateful beyond words for this wonderful achievement and it's an incredible feeling to know so many people appreciate the music on this album.

"Right before we went in to create the 'Blood' album, two of our original band members and our manager quit on us (they didn't believe) and it left us with a do-or-die situation.

"We chose to let go of all fear and make the album we've always wanted.

"Huge thanks to Robert Kampf and Don Robertson at Century Media, Kevin Churko for never doubting us, Bill McGathy for stepping in at the perfect time, our band members for bringing it to life onstage and our fans for supporting us through everything! We couldn't have done this without you! Much love!"

IN THIS MOMENT will release its sixth studio album, "Ritual", on Friday, July 21. The disc will be released by Atlantic Records in partnership with Roadrunner Records.

IN THIS MOMENT will promote "Ritual" by kicking off a major North American tour on June 20 at Peoria, Illinois's Limelight and featuring support by MOTIONLESS IN WHITE, VIMIC, LITTLE MISS NASTY and STARSET.