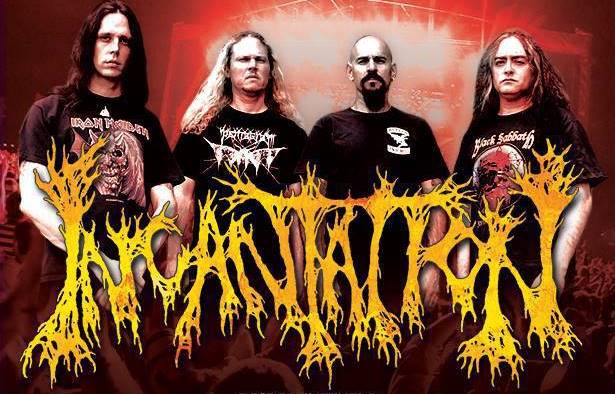 U.S. death metal veterans INCANTATION will release their new album, "Dirges Of Elysium", in late May via Listenable Records.

Comments the band: "Elysium. Sky burial, necromancy, a cult in ancient Prussia, and pure blasphemy all await those who will hear the new release.

"The music is diverse and holds more aggression then our previous, alongside with more doom hymns heard at a demonic funeral!

"As each and every record gets better by date, this by far surpasses any past materials!!

"Hell awaits in the ashes of Elysium!!"

INCANTATION earlier in the month announced the departure of guitarist Alex Bouks, who joined the band in 2007. Filling in for him during the touring cycle for "Dirges Of Elysium" will be former INCANTATION guitarist Sonny Lombardozzi.

Says INCANTATION: "We have been friends with Sonny for quite some time and he has also played with INCANTATION as far back as the early 2000s during the 'Blasphemy' era. We really feel he understands the style of the band and that he will execute the songs in a very honorable way.

"It's great to welcome back an old friend into the fold!"

INCANTATION's latest album, "Vanquish In Vengeance", was released on Listenable Records. The effort was also made available in a limited-edition box featuring a flag and an exclusive metal pin.

Although based in Pennsylvania, INCANTATION has enjoyed a 25-year musical career as one of the leaders the New York death metal scene along with SUFFOCATION, IMMOLATION and MORTICIAN.