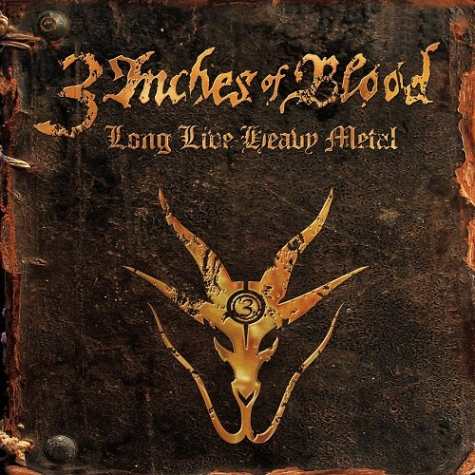 "Metal Woman", the new video from Vancouver, British Columbia, Canada metallers 3 INCHES OF BLOOD, can be seen below. The song comes off the band's new album, "Long Live Heavy Metal", which was released on March 27 via Century Media Records.

For "Long Live Heavy Metal", 3 INCHES OF BLOOD reunited with producer and engineer Terry "Sho" Murray (CITY OF FIRE, EXHIBITIONISTS),who worked with the band on their seven-inch single, "Anthems For The Victorious".

3 INCHES OF BLOOD teamed up with Kim Thiessen to perfect their artistic vision for the album, which was released as a digipack and when opened, lays out similar to that of a book.

Stroud and 3 INCHES OF BLOOD have been working together on a variety of things, and Stroud is beyond pleased to shift his involvement to a creative level.

3 INCHES OF BLOOD recently took part in the "Metal Alliance Tour 2012" alongside DEVILDRIVER, THE FACELESS, DYING FETUS, JOB FOR A COWBOY, IMPENDING DOOM and WRETCHED.

Starting in June, 3 INCHES OF BLOOD will hit the road with MUNICIPAL WASTE and BLACK TUSK for a U.S. tour, and then head back to Canada for a headlining run.