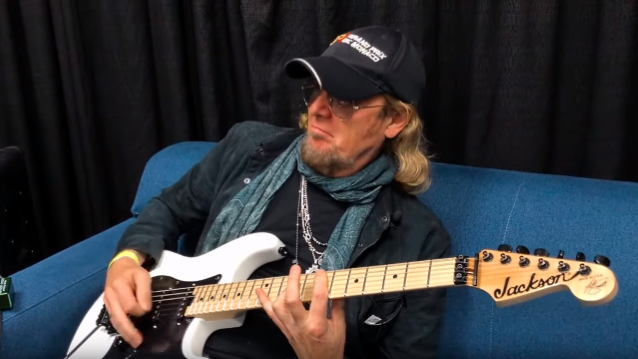 In the video below from Jackson Guitars, IRON MAIDEN guitarist Adrian Smith reveals the first song he learned to play on guitar — "Silver Machine" by HAWKWIND.

Earlier this year, Adrian told Andertons Music Co that the first bands he listened to and that got him into music were "[DEEP] PURPLE, 'Machine Head' era, FREE, 'Free Live' [with Paul] Kossoff, HUMBLE PIE, going back a bit now. All sort of English raucous kind of bands. When [I] started out playing, [I] played THE [ROLLING] STONES and BEATLES, 'cause they were a few chords; it was easy. And twelve-bar blues — that's how we started."

Smith and the rest of IRON MAIDEN are rumored to have completed work on a new studio album, to be released later this year. The British heavy metal legends haven't issued any fresh music since 2015's "The Book Of Souls" LP, which was recorded in late 2014 in Paris, France with longtime producer Kevin "Caveman" Shirley.