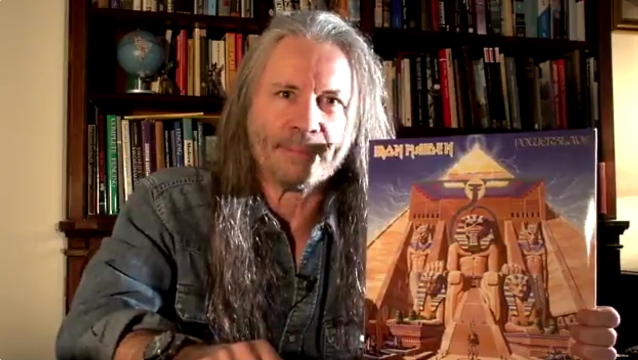 IRON MAIDEN singer Bruce Dickinson will look back on the band's 1984 album "Powerslave" in the February 12 installment of "Tim's Twitter Listening Party".

Dickinson will offer up a track-by-track rundown of the record for the 666th edition of Tim Burgess's virtual listening party series, which was launched in March 2020 at the start of the global coronavirus pandemic.

In a video message announcing the listening party, Dickinson promised that he would reveal "a few interesting secrets" about MAIDEN's fifth studio album. "And it's gonna be fun," he added.

Regarding how MAIDEN came to be involved with "Tim's Twitter Listening Party", Burgess told NME: "We started these listening parties at the beginning of the first lockdown and thought we'd do a couple of weeks of them until everything got back to normal. Nick Mason hosted our 'Saucerful Of Secrets' listening party to celebrate our 500th and someone tweeted that we should mark the 666th as a special occasion. Naturally, we tweeted IRON MAIDEN and they said they'd love to join us."

"Powerslave" is notable for its Ancient Egyptian theme. The LP contains a musical re-telling of Samuel Taylor Coleridge's "The Rime Of The Ancient Mariner", which uses pieces of the original poem as lyrics and was — at thirteen minutes and 40 seconds — MAIDEN's longest song for over 30 years until it was surpassed by the 18-minute "Empire Of The Clouds" from the 2015 album "The Book Of Souls".

IRON MAIDEN hasn't issued any fresh music since "The Book Of Souls", which was recorded in late 2014 in Paris, France with longtime producer Kevin "Caveman" Shirley. It was the longest MAIDEN album, clocking in at 92 minutes, with lyrics heavily based in the themes of death, reincarnation, the soul and mortality.