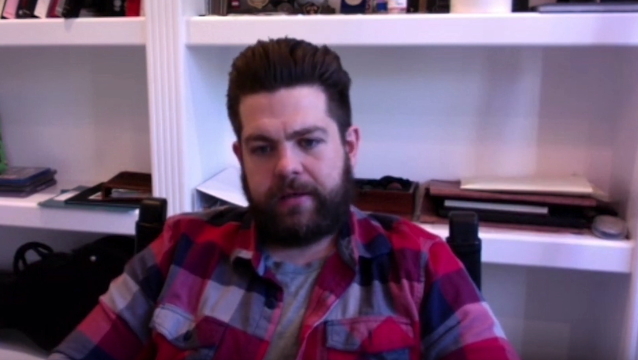 Jack Osbourne, son of Ozzy and Sharon Osbourne, was a guest on the latest episode of "Mind Wide Open", the IGTV series and podcast hosted by Chris Cornell's daughter Lily Cornell Silver.

"Mind Wide Open" aims to "help destigmatize the conversation around mental health," according to a press release. Guests will include mental health professionals, public figures, peers, and others who will share their stories and struggles, as well as provide knowledge and insight.

Lily and Jack talk about their life and upbringing, sharing the unusual similarities in their lives: being brought up in the spotlight, both being the offspring of iconic rock singer fathers and powerful music manager moms. Jack acknowledges his unique lifestyle, especially during his formative years as a teenager and the pitfalls that can come with a life in the public eye.

Speaking about the experience of taking part in his family's reality TV show, "The Osbournes", Jack says: "I went through a real rough patch. From the moment that when we did 'The Osbournes' to when I was about… We only did the show for, like, three years, but during that three years, I was not in a good place. And it's because human beings are not designed to be famous. And I'm sure you can relate — growing up with a rock star father, fame is torturous, and as a child, all of a suden, it's, like, [being] on this hugely successful show, which kind of happened very accidentally. It's not like we were, like, 'Yeah, let's go out and we're gonna go do this thing.' It just kind of happened. And I really lost my way. I struggled a lot with depression even before the show, and then once the show kicked off, I kind of fell into drugs and alcohol. And it was pretty aggressive. I often joke that I picked up a good, healthy Oxycontin habit. And I ended up in rehab at 17. And I've been sober ever since, but it took a lot of self-work to kind of try and knock back a three-year experience."

Jack also delves into his struggles with fame and depression, the joys and responsibilities that come with being a dad of three daughters and his journey in sobriety.

Jack's infamous mom and longtime music manager of Ozzy Osbourne and others, Sharon Osbourne, says: "I'm so proud of Lily and I just love her idea of bringing attention to the subject of mental health with 'Mind Wide Open'. This issue is so prevalent with all generations and more than ever there's a real need for more forums like this for people to speak up and have meaningful discussions about mental health."

Susan Silver, another powerhouse music manager (ALICE IN CHAINS, SOUNDGARDEN and others) and proud mom of Lily, adds: "Sharon has been a mentor and a friend to me since Jack was a little boy. With all that Jack and Lily have experienced in their lives, it's inspiring to witness their brave and vulnerable conversations about addiction and mental health. They give me hope that young people will lead the way in making sure that mental health challenges will soon be talked about with the same compassion as any other health crisis."

Lily is continuing on her mission to destigmatize the conversations around mental health and is quickly being recognized as a public mental health advocate.

"Mind Wide Open" will continue as an IGTV series with new shows every other Tuesday at 12 noon, ET and is now also available as a podcast on Spotify and Apple.