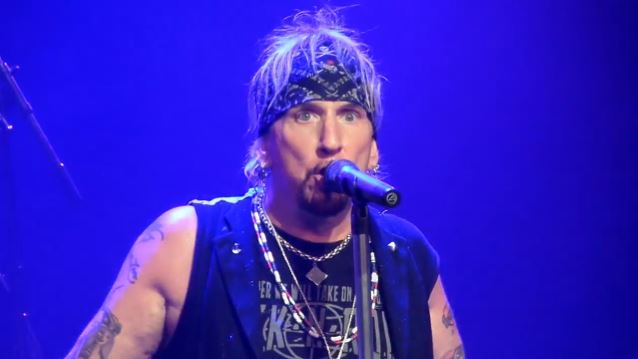 JACK RUSSELL: 'The World Is, Once Again, My Oyster'

Andy Preston of the 98.7 The Gater radio station in West Palm Beach, Florida recently conducted an interview with legendary GREAT WHITE singer Jack Russell, who currently fronts his own version of the band called JACK RUSSELL'S GREAT WHITE. You can now listen to the chat below. A couple of excerpts follow (transcribed by BLABBERMOUTH.NET).

On how he is doing professionally and personally:

Russell: "I feel great. The world is, once again, my oyster, as they say. I'm sitting on my boat right now in California, just enjoying the sun. Things are really right with the world. I'm happy, my band's fantastic, the music's never sounded better, my voice sounds great, I'm in good health. I'm damn glad to be here, as they say. [Laughs]"

On the current lineup of JACK RUSSELL'S GREAT WHITE:

Russell: "I finally got the band that I've always wanted. It took me a while and I went through several players on the way. My guitarist, Robby Locher, he's been with me since the inception. My old bass player, Tony Montana, is back in the band, but he's playing guitar, keyboards and harmonica. The drummer's name is Dicki Fliszar; he's played with Bruce Dickinson and the like. And the bass player's name is Chris Tristram; he's just an amazing bass player and a great guy. I mean, the band is just rocking. I mean, it's just note for note, just like the album. Everybody sings, everybody writes. We have some new stuff coming out. We're gonna release [it] on the Internet in two or three weeks. We're just gonna give away a free song from the upcoming album. We'll just let [everybody] check it out and listen to it, and we'll release the album a little later. I'd like to get [the CD] out in the spring. It will be the first [JACK RUSSELL'S GREAT WHITE album] — one of many, I hope."

Regarding the musical direction of what will eventually be released as the JACK RUSSELL'S GREAT WHITE debut, Russell told SleazeRoxx.com: "We want the new material to blow people's ears back. It has the elements of the best GREAT WHITE music ever written, but there's an edge. Tony brings that validity, while Robby and Dicki add a new life. It's going to surprise people."

Added Montana, "It's got the classic sound. The first element is Jack's voice.

"No other band sounds like this one ever did or does now.

"When I was 17 years old, I remember walking around the UCLA campus listening to the band's first EP. I was a fan before I ever joined the band. We're going to maintain that same integrity going forward."

He continued: "The band was always a standout from the era it came from. It was never a hair band. Listen to the music, and that's evident. Everything was based in blues. We want to add to that legacy with new material preserving those timeless elements."

In March, 2012, Russell sued his former bandmates Mark Kendall, Michael Lardie and Audie Desbrow over their continued use of the GREAT WHITE name after Russell had taken a leave of absence from the band for medical reasons. The band countersued, and the parties were involved in contentious litigation for more than a year. After three days of closed-door mediation before U.S. Magistrate Judge Carla Woehrle, the parties reached a comprehensive agreement. While many of the terms of the agreement remain confidential, it was revealed in August 2013 that the current GREAT WHITE band would continue to use the name GREAT WHITE and Russell would perform under the name JACK RUSSELL'S GREAT WHITE.