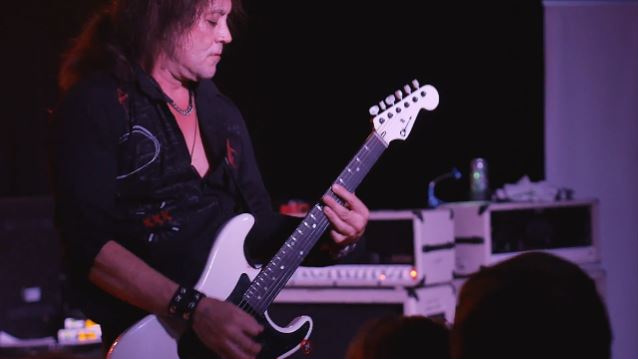 JAKE E. LEE: Why I Gave Up Songwriting Credit For OZZY OSBOURNE's 'Bark At The Moon'

Guitarist Jake E. Lee says that he wrote most of the music for Ozzy Osbourne's classic 1983 album "Bark At The Moon" — with some help from Osbourne's bassist at the time, Bob Daisley — but that he didn't get any credit for it as part of an agreement he made with Osbourne and Ozzy's then-record company. The LP is the only Ozzy Osbourne album on which the songwriting is credited entirely to the singer.

Lee, who was tapped by Ozzy to replace the late Randy Rhoads in Osbourne's band, played on two Ozzy records: "Bark At The Moon" and 1986's "The Ultimate Sin".

During a December 1 appearance on Eddie Trunk's "Trunk Nation" show on SiriusXM's Hair Nation, Lee recalled how he gave up the songwriting credit for "Bark At The Moon". He said: "Here's the truth. This is really gonna get me in more hot water, but whatever, I'm in hot water and I don't see a way out…"

He continued: "I was told from the get-go, '[If] you write part of the songs, you'll get writing credit, you'll get publishing. That's part of your deal.' So we recorded the album. I'm recording the album at Ridge Farm in Scotland, and this in the middle of Scotland, in the middle of farmland. It is actually a farm — Ridge Farm is actually a farm; the recording studio is in the barn. So I'm by myself. I don't have management, I don't have a lawyer, I don't have anything. Anyway… But they promise me, 'You'll get what's coming.' And I keep asking because I'm getting really close to finishing all my stuff on the record, and finally, once I lay down the final track of my guitar playing, they said, 'Ah! We have the contract for you.' And in it, it says, specifically, 'Ozzy Osbourne wrote all the songs. You had nothing to do with any of the writing, you have no claim to publishing, and you cannot say so publicly.' And I looked at it. I'm looking at Sharon [Ozzy's wife/manager], and I said, 'This is not what you told me before.' And she says, 'No, it isn't.' [And I said], 'Why do you think I'm gonna sign it?' And she says, 'Because if you don't, we'll give you a plane ticket, you go back home and you stand in line and you sue us. In the meantime, we have all your tracks, we'll get another guitar player, he'll redo your tracks, and you'll have nothing.'"

Jake added: "The only reason I'm saying it now is because that was just mean. That was mean. What am I gonna do? Really? Am I gonna say, 'Fine. I'm going home. Take my tracks off. Some other guy will get all the credit for playing guitar, and I still have to try to sue you for the rights?' It would have been just… not a good decision."

Asked how it came about that he got songwriting credit for his work on "The Ultimate Sin", Jake said: "Well, then, I refused to do anything until I had a contract in front of me promising me writing credit and publishing."

Lee also recalled some of the writing sessions for "Bark At The Moon", telling Trunk: "It's funny, 'cause when I was re-learning 'Now You See It (Now You Don't)' [for my new band RED DRAGON CARTEL's live set], I could remember vividly when [Bob and I] wrote that song together and how it was kind of based on 'Whole Lotta Love' by LED ZEPPELIN. We were trying to come up with a riff like that. And I had the riff, [Bob] wrote the bridges, and we both wrote the chorus. And I can remember him sitting there and me sitting here and writing that song together. He had a lot to do with… I came up with most of the riffs and most of the music. He would add things that made it special."