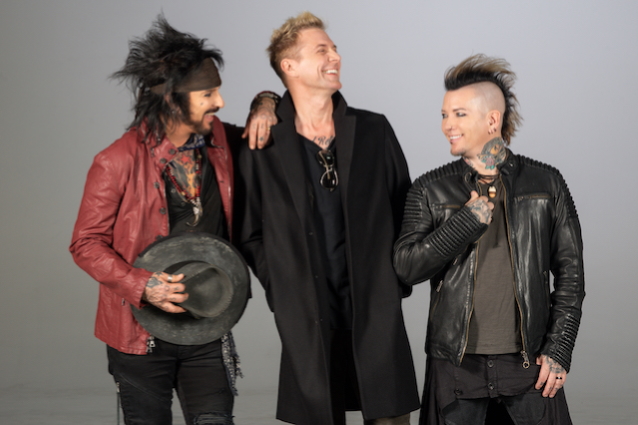 JAMES MICHAEL 'Would Love' To Make Another SIXX:A.M. Album

In an interview with "The Chuck Shute Podcast", SIXX:A.M. singer James Michael spoke about whether there are any plans for the band to record more new music or play live shows in support of the "Hits" compilation album, which came out last year. He said (as transcribed by BLABBERMOUTH.NET): "We're on hiatus. We don't have any plans right now. I'm communicating quite regularly with both Nikki [Sixx, SIXX:A.M. bassist] and DJ [Ashba, SIXX:A.M. guitarist]. And we all have some other creative projects that we are doing together, or will do together.

"I don't know if SIXX:A.M. will do another record. I think I would really love that if we did, and to be honest with you, I think probably Nikki and DJ feel the same," he continued. "So we'll just have to see. It's certainly not off the table. But it just depends on where we're at in our lives and if we feel that it's something to pursue."

James went on to say that he is preparing to put out some of his solo music. "I'm gonna be releasing some music in September," he said. "I've been back in the studio recording. And it's really cool stuff. If you're a SIXX:A.M. fan, I think you're gonna really like this. It doesn't sound like SIXX:A.M. necessarily, but these songs could absolutely have been SIXX:A.M. songs. So I'm getting really excited about putting out this music. And I think mid-September I'm gonna release the first song. … I'm just having a blast with it. And I really have no expectations for it other than I wanna start putting out music for the fans again because it's been a long time and we've had a lot of people asking about SIXX:A.M. And while this won't be SIXX:A.M., I definitely think it's gonna be something that SIXX:A.M. fans really respond to."

In a January 2022 interview with Antihero Magazine, Ashba, who has spent the last year promoting his ASHBA solo project, spoke about whether there are any plans for SIXX:A.M. to record more music or tour. He said: "SIXX:A.M. has always been a labor of love. It's weird with SIXX:A.M., we all three are currently still full-blown members and we are very proud of everything we've created. James has mentioned recently that he's kind of retiring, kind of stepping away from music, which is sad to hear, but the guy has done so many great, great things in his career and the songs he has been a part of. He has a lot to be proud of.

"Now, that being said, the three of us at any given time could call each other and go, 'Hey, let's do one more tour. Let's write a new song,'" he continued. "That's just how we are. We don't ever plan anything. So, I would say, never say never, but I have no intention of doing anything further with it. I think we've put a nice bookend to SIXX:A.M. with the greatest hits and if something else were to happen so be it, but I think we're all pretty satisfied with what we've done with that."

Last December, James also told Australia's Rock Lives Here that there are no plans for SIXX:A.M. to do anything else at the moment. He said: "It's funny — every time SIXX:A.M. made an album, we said to ourselves, 'This is the last album we're gonna make.' We said that on 'The Heroin Diaries' soundtrack. We said, 'This is a one-off. We'll never do this again.' Then we did 'This Is Gonna Hurt', and it was, like, 'Yeah, this is gonna be our last album, for sure.' And then we did 'Modern Vintage', [and it was], like, 'This is gonna be our last one.' So we've been saying that since the beginning.