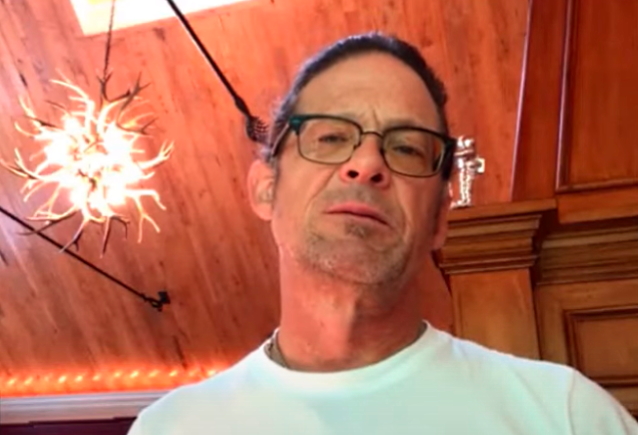 JASON NEWSTED: Why I Always Wore METALLICA T-Shirts Onstage During My Time With The Band

In a brand new interview with Knotfest.com's "Talk Toomey" podcast, former METALLICA bassist Jason Newsted was asked why he always wore the band's t-shirts while performing live. He responded (as transcribed by BLABBERMOUTH.NET): "I believed in myself and I believed in my band… I would do whatever I could, what was within my power, to promote and forward our success. I would sacrifice myself in any manner asked; there were no limits. I would do whatever it took, what I could possibly do, in my limited knowledge and experience, to play my role to the best of my ability to make us successful. Flying the colors made me — as [American singer-songwriter] Jason Isbell says — 'black metal t-shirt my shield.' It was. And it always was. And it was the name of my fucking band across the front. And guess what? There is no bigger one. So I pridefully wear this — I fly my colors more pridefully than any Hell's Angel or whatever through all of time."

He continued: "And one little side note that goes along with doing what I can for the cause. If you go back and you talk to the guy after the show that comes to tell Lars [Ulrich, METALLICA drummer] about the dough… He says, 'By the way, Jay, you know the 'executioner' shirt you've been wearing the last three days? It's outsold everything else by 40 percent. So take that with you, okay?' And everybody gets that money — manager, crew guy, band guy. Everybody shares in that money. There you go, bro."

Newsted's exit from METALLICA was documented in the band's 2004 documentary, "Metallica: Some Kind Of Monster", which followed the members of the group through the three most turbulent years of their long career, during which they battled through addiction, lineup changes, fan backlash, personal turmoil and the near-disintegration of the group while making their "St. Anger" album.

Jason spoke in detail about the reason he left METALLICA in a 2013 interview with Scuzz TV. Newsted said that his eventual split with the group was over the way his then-side band, ECHOBRAIN, was handled. Newsted explained: "The management of METALLICA was very, very excited about ECHOBRAIN, wanted to take it out for me, wanted me to do ECHOBRAIN also, with METALLICA. They felt ECHOBRAIN was that good, the singer was that good, and it didn't affect METALLICA because it was a totally different kind of thing, and I was in METALLICA; that would give it its pedigree already."

Newsted continued: "They had told me, pretty convincingly, 'This is a great record, we've been playing it around the office, that's all I’ve been hearing, it's fantastic, this kid has a great voice. Let's do something with this.' That's what they told me, and then James heard about it and was not happy. He was, I think, pretty much out to put the kibosh on the whole thing because it would somehow affect METALLICA in his eyes, because now the managers were interested in something I was doing that had nothing to do with him."

Newsted told The Pulse Of Radio a while back that he never saw how ECHOBRAIN could have interfered with METALLICA. "I never felt that it was going to affect METALLICA in any way," he said. "There was no way that it could. The monster and the integrity and the legend that METALLICA's built, it would take a lot more than that to ever affect it."

Newsted added, "The people that I had counted on for 15 years to help me with my career, help METALLICA, take care of my money, do all of those things, told me, 'Your new project is fantastic, we'd like to help you with it.' James heard about it, the manager calls me back a couple of days later — 'Sorry we're not going to be able to help you with that ECHOBRAIN thing.'"