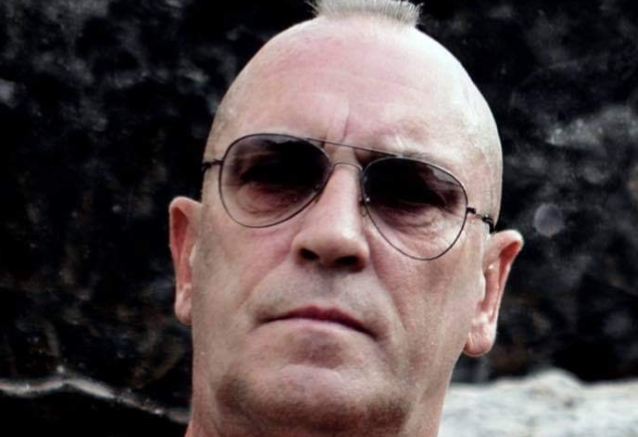 At this year's Bloodstock Open Air festival at Catton Park, Walton-on-Trent, United Kingdom, former VENOM and current VENOM INC. guitarist Jeff "Mantas" Dunn spoke to Bloodstock TV's Oran O'Beirne about the 40th anniversary of VENOM's classic "Black Metal" album. Regarding VENOM's early musical and visual approach, he said (as transcribed by BLABBERMOUTH.NET): "We always said, if you put BLACK SABBATH, JUDAS PRIEST, MOTÖRHEAD and KISS, you put them all into a big pot and you stir it all up and then pour it out on the table, it's gonna spell VENOM. Because that's what we wanted — we wanted more leather than PRIEST, more pyros than KISS, dirtier and faster than MOTÖRHEAD, more Satanic than BLACK SABBATH. And that's what happened with us — the bands that followed us looked at us and went, 'Right. We can shove more pentagrams out there. We can be more evil than that.' So black metal is still around 40 years to this day… Now, they have evolved. Without evolution comes extinction."

He continued: "People say, 'Were VENOM the first black metal band?' Fuck yes! Sorry. We have an album called 'Black Metal', we have a fucking song called 'Black Metal', and we created a genre. And that happened just by us saying, 'We're black metal.' That was it. It was a statement to individualize [VENOM from everyone else]… We wanted to be alienated from all of this that was going on."