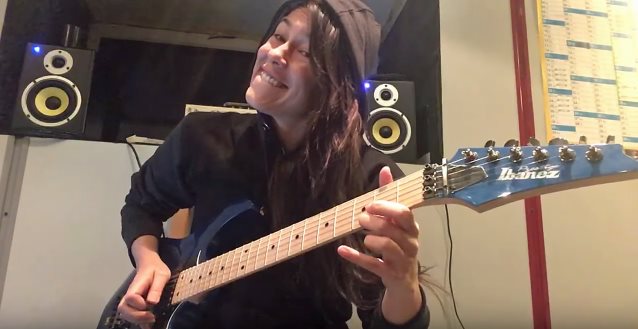 JEN MAJURA Is Thankful To Be Part Of EVANESCENCE

In a brand new interview with Greece's Rock Overdose, EVANESCENCE guitarist Jen Majura was asked if there are plans for the band to record a new album as a follow-up to 2011's self-titled effort. She responded: "Well, you know, I am the European part of EVANESCENCE. Amy [Lee, EVANESCENCE singer] and the [other] guys are overseas, and… To be honest, from what I can tell, we mainly focus on the touring for this year, which is, first of all South America in spring and Europe in summer… and something else. [Laughs] But I guess… I think Amy said in one of her interviews that she's already working on new music. You never really stop working on music, because you get inspiration from every moment in your life. So it could be, like, you're travelling in your car and then you get a great inspiration or idea, and maybe you just pick that up later — like months later or years later — or you find cool stuff on your computer which you recorded, like, gazillions of ages ago, and that might be something… So you never really stop being creative. And, from what I can tell, I think she's already collecting and working on music. So, we'll see."

Jen also talked about what it has been like to join EVANESCENCE in August 2015 as the replacement for Terry Balsamo. She said: "[To be] honest, I've never been, like, one of those insane EVANESCENCE fans. Of course, I knew the music — everybody does — and I love the music, and I bought the CDs, and I listened to the songs, and I sang along… But being able, and thankful for being able, to be one part of this band is… It's hard to describe it in words, because… I do not see it as a job. Of course it's work, but, for me, mainly, after I got to know all the guys really [well], [it's] mainly fun, because we really get along very good. Even if we're not on the road touring, we keep texting each other and talk on Skype and stuff, and it's really a very, very mature, friendly relationship that we have, with a lot of respect for each other. And playing those shows… One can never understand the feeling f how it is to stand on stage together with those guys, because they're just so talented, creative, great musicians, and we're just having so much fun on stage, andI think the people can see that. It has nothing to do with, 'Oh, we've gotta work now?', 'Oh, we've gotta deliver music?' It's more like, 'Come on! Let's do a rock show and have fun and have a great time!' And I really appreciate that, because this is something that is not happening within every band. I know bands [where] hardly the singer talks to the guitar player, and they have different hotels, and so many issues and stuff and… I was looking for a band my entire life where I can say that everybody is friends, everybody is honest, everybody is talented and working on the same thing, which always should be... Do a really cool rock show, enjoy yourself and make fans happy. And I think that is something I found in EVANESCENCE, because… it's just cool! [Laughs]"

EVANESCENCE released a very special career-spanning vinyl box set last fall encompassing all of the band's studio albums — "Fallen", "The Open Door" and "Evanescence" (with the latter two making their vinyl debut) — and, for the first time ever, the commercial debut for the previously unreleased demo album "Origin". Also included in "The Ultimate Collection" six-LP set is "The Lost Whispers" album, which officially culls the band's legendary bonus tracks and features the studio version of the long sought-after tour intro "Lost Whispers" and the first new EVANESCENCE studio recording in years, "Even In Death (2016)", a song that originally appeared on "Origin". The box set includes a 52-page casebound book featuring art, handwritten lyrics, photos and rarities.