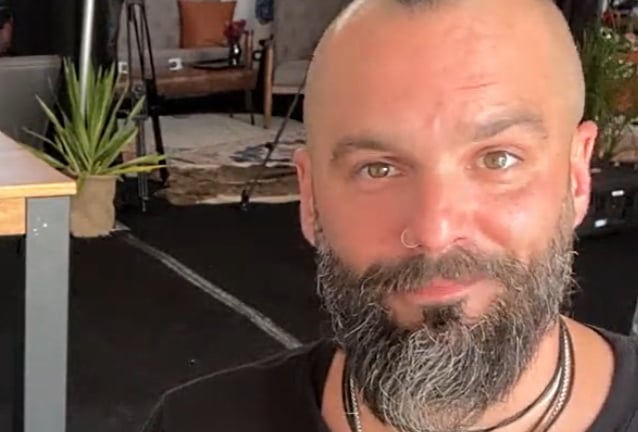 JESSE LEACH On KILLSWITCH ENGAGE's Upcoming Album: 'It's A Killer Record So Far'

At this year's Aftershock festival in Sacramento, KILLSWITH ENGAGE frontman Jesse Leach spoke to Baby Huey of the 107.7 The Bone radio station about the band's plans for the coming months. He said: "We finish up the tour with LAMB OF GOD and we go home and continue demoing the new record. The record is kind of the only thing I can think about right now. I've got a lot of writing to do and I'm excited. It's a killer record so far."

Back in June, Leach told Australia's Heavy that he and his bandmate would try to get the new KILLSWITH ENGAGE LP "wrapped up and done quickly, because we want it to be a record that's not gonna take a lot of time to create. We want that raw, fresh feeling, so a lot of these demos I'm trying to [get] through quickly just to get the energy and then we'll sort of dissect them as new get into the studio," he explained. "So I think there's a real spirit within us to put out new material and then tour on that new record come next year, hopefully. So that's kind of what we're all thinking."

Elaborating on the time table for the completion of the next KILLSWITCH ENGAGE LP, Leach told Heavy: "We've got a couple of sessions [scheduled]. We haven't really put deadlines or anything. But I'm personally setting goals for me to create quick, very emotional, raw stuff for the demos and then probably taking a little more time, once we get to the studio, to polish that up and make it sound really good. Some of these demos I'm getting ready to send to the guys, if you would listen to them, most people would probably laugh 'cause they're just me going nuts, just trying to get the idea out quick and then we'll worry about re-recording it and polishing it and sort of making it sound KILLSWITCH-y.

"I've always been really hard on myself — a perfectionist, if you will — and I think it's hindered me in the demo-making process," he explained. "So my approach to this record is I wake up in the morning and I write lyrics out of the sleep. I listen to the music. It's moving very quickly for me, and it just feels fresh; it feels new. And then us getting into a room and jamming on that shit together, which we haven't done in years, that's the vibe we're going for. We kind of wanna bring that live feeling, that live sound to this next record… I want that energy to be there.

"Live music shouldn't be perfect," Leach added. "I don't like the studio fixes, I don't like the tuning — I hate all that shit. So the less that can happen, I'm into it. I'd rather keep it raw. It's rock and roll, man — it shouldn't be perfect. I think metal, over the years, has become very compressed and very manufactured. To me, I'm all about pushing away from that. So I think this next record will be a push-and-pull, 'cause [KILLSWITCH ENGAGE guitarist and producer] Adam [Dutkiewicz] is very much a perfectionist with the way he likes things to sound. So it should be interesting. He's on board of that too — sort of getting more of a live feel to what we're doing. I think it comes across. When you come see a band live like us, it is a little different than a record. But it should be."

As for the lyrical content of the next KILLSWITCH ENGAGE album, Jesse said: "I've purposefully been extremely spiritually minded and positive and trying to write uplifting things that are gonna help people process what we've been through.

"I think there's two ways you can go — you can get angry and write hyper-political stuff and anti-government or whatever, which I've done in the past, and I still stand by that, but I think, for me, where my gift lies, after what we've been through, is more of a comfort, more of an uplifting thing," he noted. "So I'm leaning hard on that — a little more existential, more looking forward, if you will, lyrically. It's probably gonna be some of the most positive stuff that I've ever written, and I'm doing that on purpose — for myself, but also for the listener. I think it's just time for us to put out a record that's just beaming with positivity and hope. And that's what I'm going to do."

Earlier this week, KILLSWITCH ENGAGE announced a trio of holiday season shows. The band will play at the Starland Ballroom in Sayreville, New Jersey on December 28; at The Paramount in Huntington, New York on December 29; and a hometown show at The Palladium in Worcester, Massachusetts on December 30. RIVERS OF NIHIL, UNEARTH and a third, as-yet-unannounced opener will serve as support at all three shows.

KILLSWITCH ENGAGE's latest album, "Atonement", was released in August 2019 via Metal Blade Records in the U.S. and Sony Music Entertainment in the rest of the world. The disc featured guest appearances by former KILLSWITCH ENGAGE singer Howard Jones and TESTAMENT frontman Chuck Billy. It marked the band's third full-length release since the return of Leach, who rejoined the group in 2012.

In July 2021, Leach and Dutkiewicz released the second album from their TIMES OF GRACE project, "Songs Of Loss And Separation", via the band's own imprint label, Wicked Good Records, distributed by ADA Worldwide.