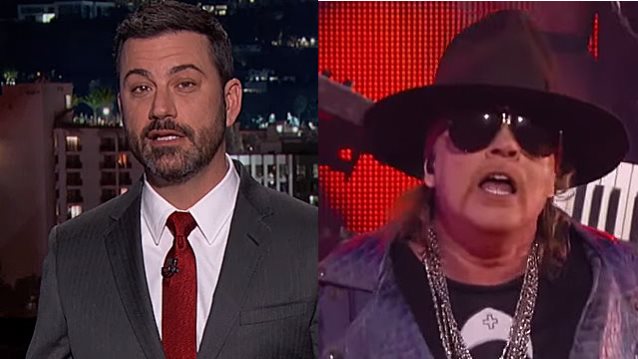 GUNS N' ROSES singer Axl Rose's scheduled appearance on Tuesday night's (January 5) edition of ABC-TV's "Jimmy Kimmel Live!" was canceled. As of early Monday (January 4),Rose was listed as the show's first guest for the broadcast but his name was removed from the site by mid-afternoon. No reason has been given for him dropping out, although the Los Angeles Times said it was "due to unforeseen circumstances."

During last night's broadcast, Jimmy Kimmel poked fun of Rose for canceling his appearance, telling his viewers: "Axl Rose was supposed to be here tomorrow, but he will not be here tomorrow, for reasons known only to Axl Rose. Or maybe he will be here and he's just trying to keep us guessing. I don't know."

As previously reported, GUNS N' ROSES has been officially confirmed as a headliner for the 2016 Coachella Valley Music And Arts Festival, which will take place on the weekends of April 15 through April 17 and April 22 through April 24 at the Empire Polo Club in Indio, California. GUNS N' ROSES will play on April 16 and April 23.

Although the lineup of the band has yet to be announced, original guitarist Slash and founding bassist Duff McKagan both shared the Coachella announcement on their Facebook pages — seemingly confirming that they will be playing alongside singer Axl Rose as widely speculated. It is not known at present if any of the band's other original members will appear.

According to Billboard, the GUNS reunion — which sources say has been in the works for two years — is also seeking to mount a 25-city stadium tour, with the band reportedly asking for anywhere from $3 million to $5 million a show.