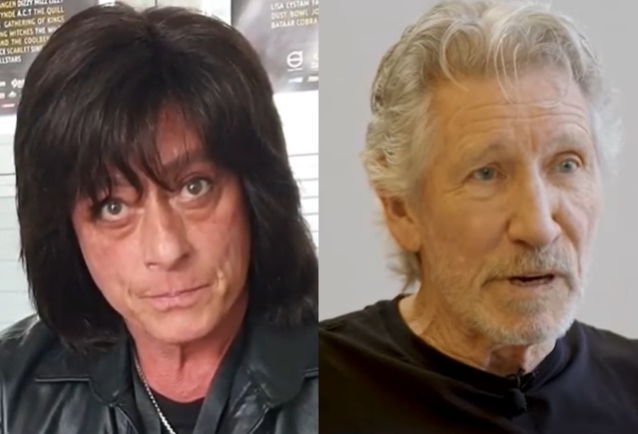 Former RAINBOW and DEEP PURPLE singer Joe Lynn Turner has apparently thrown his support behind Roger Waters over comments the PINK FLOYD co-founder made about Russia and Taiwan.

Waters was recently interviewed by CNN's Michael Smerconish about political aspects of the musician's "This Is Not a Drill" performance, during which the audience is shown a montage of "war criminals" that includes a photo of President Joe Biden.

"He's fueling the fire in the Ukraine, for a start," Waters told Smerconish about why he chose to include Biden in the clip.

"That is a huge crime. Why won't the United States of America encourage [Volodymyr] Zelensky, [Ukraine's] president, to negotiate, obviating the need for this horrific, horrendous war?"

After Smerconish responded that Waters got it "reversed" and was "blaming the party that got invaded," Waters fired back, saying it was about the "action and reaction of NATO pushing right up to the Russian border."

Waters went on to tell Smerconish that he should "try and figure out what the United States would do if the Chinese were putting nuclear-armed missiles into Mexico or Canada."

Smerconish interjected saying that "the Chinese are too busy encircling Taiwan as we speak."

That prompted Waters to respond: "They're not encircling Taiwan! Taiwan is part of China. And that's been absolutely accepted by the whole of the international community since 1948 and if you don't know that, you're not reading enough. Go and read about it."

On Sunday (August 7), Turner took to his official Facebook page to share a video of Smerconish's interview with Waters, and he included the following message: "Roger Waters speaks TRUTH to power! Thank you Roger. Someone has to say it..."

This is not the first time Turner has publicly taken a political stance. Back in 2015, the singer made headlines when it was revealed that he joined a list of Western celebrities who publicly expressed support for and defended Vladimir Putin, whose image had suffered greatly because of Moscow's aggressive foreign policy.

Roger Waters speaks TRUTH to power! Thank you Roger. Someone has to say it…