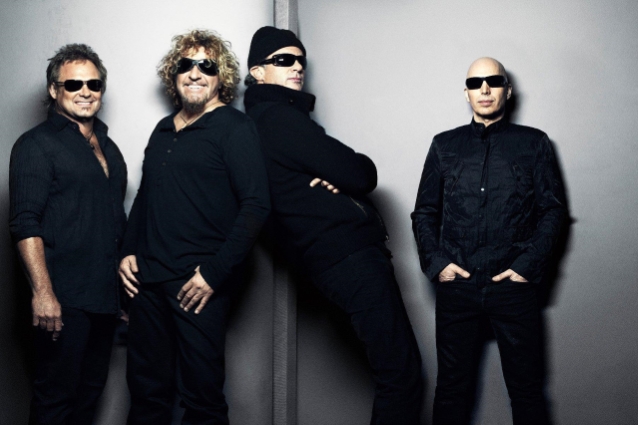 Joe Satriani says that he has stopped pushing for CHICKENFOOT to reunite for more live shows and possible new music.

The supergroup, which features the legendary guitarist alongside former VAN HALEN singer Sammy Hagar, ex-VAN HALEN bassist Michael Anthony and RED HOT CHILI PEPPERS drummer Chad Smith, has been largely inactive since 2012 when it toured with Kenny Aronoff on drums due to Smith's busy schedule with his main band.

Asked in a new interview with SiriusXM's "Trunk Nation With Eddie Trunk" if he believes CHICKENFOOT still has some "unfinished business" to take care of, Satriani told host Eddie Trunk (as transcribed by BLABBERMOUTH.NET): "I think so… I believe the last time that I was in the worst mood about CHICKENFOOT, I was at your studio and you were surprised, I think, when I had said that I'd be into working with other people 'cause I had kind of thrown my hands up in the air with those guys. After that, I kind of backed off bugging, because I thought I just don't wanna be that guy. That's the guy that's always saying, 'C'mon, guys. Let's get the group back together.'

"I still think that it has to happen from the other side there, because they're so busy. Like, Chad right now is about to launch a worldwide tour with the CHILI PEPPERS and a new album," he continued. "So the reality is that he won't really have time for quite a while. It's not my place anymore to be the guy bugging him about it. But Sammy and I talk every week, and it's all cool. Everyone's on good terms. It's just a question of how do we fit it in to this crazy world we live in."

Last March, Anthony told the Morristown, New Jersey radio station 105.5 WDHA that CHICKENFOOT will reunite for more live shows and possible new music. "I think there'll definitely be some kind of CHICKENFOOT [activity] in the future," he said. "Sammy and I, we talk about it all the time, and I text with Joe and Chad all the time, if we're not speaking. And I know Joe really wants to do it."

Michael, who has spent most of the last few years playing with Sammy in THE CIRCLE, continued: "It's kind of funny, 'cause we start doing THE CIRCLE thing, and Sammy gets all enamored with THE CIRCLE. He's all, 'Oh, yeah. It's THE CIRCLE this and that.' But you never know. He might wake up tomorrow and go, 'Oh my God. CHICKENFOOT — let's do a CHICKENFOOT gig.'

"I definitely think that CHICKENFOOT will do something else," Anthony reiterated. "Whether we'll record another album, which would be great — I'd love to do that. But I'd love to just together and even just do some shows — do a bunch of shows with those guys. 'Cause that's actually some of the best times I've ever had on the road. Believe me — touring with Chad Smith is like touring with no other… Even hanging out with Chad since he's been sober, he's still crazier than some of the most crazy people I know.

"But we definitely have a great time. And I definitely feel that we'll [get together], if not to record some new stuff, hopefully in the near future to at least get together and play some shows together."

Three years ago, Joe told Meltdown of Detroit's WRIF radio station that "the door is always open" for CHICKENFOOT to play again, "because there's a true connection between the four of us, and we'd all do it in a second."