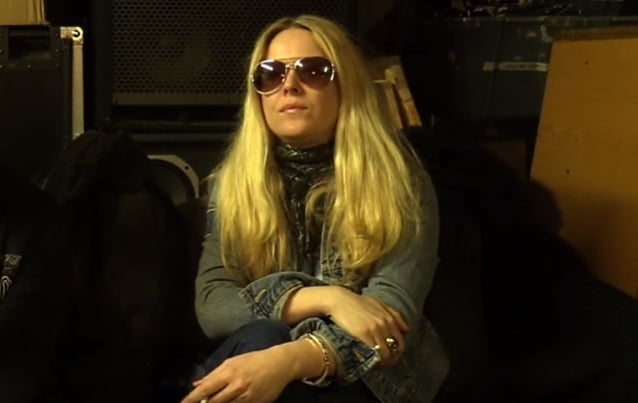 JOHANNA SADONIS Doesn't Like It When LUCIFER Is Called 'Stoner' Band: 'I Actually Hate That Word'

Alex Haber of Heavy New York conducted an interview with frontwoman Johanna Sadonis of heavy rockers LUCIFER prior to the band's March 27 concert at Saint Vitus in Brooklyn, New York. You can watch the entire chat below. A few excerpts follow (transcribed by BLABBERMOUTH.NET).

On whether their recent "Lucifer II" studio album is the natural follow-up to their 2015 "Lucifer I" debut:

Johanna: "It's a continuation. Of course, there was a change in lineup between the first and second album, so it is a whole different animal, but I think when you see us live, we play stuff from the first and the second album, it blends in together. It ends up being the same beast, but with a little bit of a twist in the story."

On whether LUCIFER's new band members (including multi-instrumentalist Nicke Andersson of ENTOMBED and THE HELLACOPTERS fame) helped her continue in the vein of their first album:

Johanna: "No, because the original idea for LUCIFER was to actually sound way more than LUCIFER sounds now. When I was looking for a co-writing partner and [ex-CATHEDRAL guitarist] Gaz Jennings joined the band for the first album, it turned out way more doom than I had maybe planned originally for, which was great. I'm very proud of the first album; I love it. But when Gaz left, I thought that's the perfect opportunity to go back to that first initial thought for me of LUCIFER, which is a heavy rock-based band and Nicke, who I'm writing all the songs with since the second album, agreed with that. I don't think when the third album is recorded that the leap will be as big as between as the first two."

On whether she needs to hear music before coming up with a lyrical concept:

Johanna: "Yeah, but there's so many different approaches and we had all kind of cases. Often, I scribble down words that come to my head and I put them away and sometimes the music itself brings something, like I'm demoing vocals by myself and I'm trying to think, 'Okay, what does this feel like, this song?' Something comes out. I have no idea where from, but the lyrics start to already form with the first initial demoing. Sometimes, I draw a blank, then I have to go back to my notes: 'Okay, this one could be about death as well.' [Laughs] There's so many different ways to approach the music. Also with the songwriting, we do it so many different ways. Sometimes Nicke will talk about, 'Okay, we could do something that sounds like URIAH HEEP 'Look At Yourself'.' Then we sit down and it turns into something different. Usually he comes with the music, he writes some riffs and so on, then I sit down and I write the lyrics and the vocal melody, but we've had it the other way around, too. There's two songs on the new album where I gave Nicke a verse and a chorus and he wrote the music around it."

On whether her lyrics are inward or outward-looking:

Johanna: "No, they always are from my inside. They are actually all very personal, but I do shroud them in metaphors. Sometimes, I do tip my hat to something, like on 'California Son', you have the 'Born To Be Wild' and the 'Riders On The Storm', but these are purposely little hints to things that I like. But, generally, they're all from within."

On whether she's trying to leave her lyrics open to interpretation or help listeners see things from a similar point of view:

Johanna: "Both. I mean, I like when lyrics are a little bit more vague, so you can kind of make your own sense of it. But I also like songs when I listen to as a music fan, where it's a story that touches me or that I can relate to somehow."

Johanna: "It's always heavy rock. I think that's the basic concept. The first album, of course, had a lot of doom in it. The second album has that a little bit, but not so much. I would say it's a heavy rock band. What I don't understand is when we somehow get the tag 'stoner', because that has never had anything to do with LUCIFER. I just think it's really funny. I actually hate that word. [Laughs] I'm sorry. Nothing against people who dig that. I don't know — it's such a generalization. There's a difference between doom and stoner stuff. It seems like nowadays everything gets thrown into the same box."