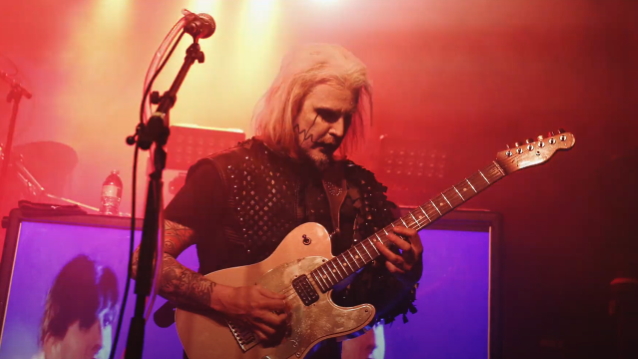 Captured at different locations all over the USA during John's 2019 "Invasion" tour, the set includes — for the first time ever — the full JOHN 5 AND THE CREATURES experience on DVD, bringing the fans closer than ever before. The performance also includes a guest appearance by Michael Anthony (VAN HALEN),Corey Taylor (SLIPKNOT, STONE SOUR) and Fred Coury (CINDERELLA).

"Live Invasion" will be released for full digital streaming on September 4, along with the full concert film also available for digital purchase in 4K ultra HD. The CD/DVD, LP and bundle will arrive in October.

All pre-orders will be hand-signed by John 5.

JOHN 5 AND THE CREATURES' latest album, "Invasion", was released in July 2019. The disc was produced and mixed by Barry Pointer at Riot House Studio and is described in a press release as "a diverse progression of the sound that John 5 fans have grown to expect from the eclectic virtuoso."

Asked in a 2019 interview whether he planned on being a solo artist when he got his start in the music industry, John said: "I just wanted to be a musician. I just love playing guitar, and, I wanted to make instrumental albums but I never thought to tour because I really didn't think anybody would care. But people are coming out in droves. It's incredible and I'm so lucky and I'm so thankful for that. People are just coming out and they're having such a great time. There's a big show, like, we do a bunch of stuff and people really enjoy it. To answer your question, I'm not really sure. I just love playing guitar. [Laughs] I just love playing guitar and I'm so thankful for what I do. It's hard to explain; it's so from the heart and honest, again. I'm so happy to be doing what I'm doing."

I am super excited about 'Live Invasion’!! Captured at different locations all over the USA during John’s 2019 Invasion tour. Included in this release and for the first time ever is the full John 5 and Creatures live experience on DVD bringing the fans closer than ever before. The performance also includes a guest appearance by Michael Anthony, Corey Taylor and Fred Coury Pre Orders now CD/DVD Set, 2LP Colored Vinyl and an exclusive merch bundles at John5store.com Live Invasion will be released for full digital streaming on September 4th along with the Full concert film also available for digital purchase in 4K ULTRA HD - john5store.com The CD/DVD, LP and Bundle will arrive in October - All Pre Orders will be hand signed by John 5! #john5 #john5official #liveinvasion