After a successful debut in 2017, which drew rock and metal fans from around the world with sellout crowds of 10,000 each day, Las Rageous returns for its second year on Friday, April 20 and Saturday, April 21. The two-day music festival created by Live Nation will take over two square blocks, in the heart of iconic downtown Las Vegas at the Downtown Las Vegas Events Center, and will feature performances from A PERFECT CIRCLE, FIVE FINGER DEATH PUNCH, GHOST, JUDAS PRIEST, and more, on two stages.

FIVE FINGER DEATH PUNCH guitarist Zoltan Bathory exclaims: "We heard this year's first-ever Las Rageous festival was a blast — we are excited to headline it in 2018! We love playing shows in our own backyard. Get ready, Vegas!"

A PERFECT CIRCLE vocalist Maynard James Keenan says the group is "looking forward to playing material from the new A PERFECT CIRCLE release at Las Rageous. Bringing new songs to life in a live setting is always exciting."

Kurt Melien, president of Live Nation Las Vegas, says: "Las Vegas is home to an incredible history of rock and metal music, and we love that we have the opportunity to put local talent in the spotlight, including one of our headlining bands, FIVE FINGER DEATH PUNCH."

The lineup for Las Rageous is as follows:

Festivalgoers can expect to hear fan favorites and possibly new music from Sin City mainstay and Saturday night headliner FIVE FINGER DEATH PUNCH, who just released their greatest hits album, "A Decade Of Destruction", on December 1. A PERFECT CIRCLE — featuring Billy Howerdel, Maynard James Keenan, James Iha, Jeff Friedl, Matt McJunkins — headline Friday night with an eclectic set that may include their new single, "The Doomed", their first new song since 2013, which will appear on their upcoming 2018 album.

The diverse music lineup ranges from British heavy metal legends JUDAS PRIEST and SAXON, to the spectacle of GHOST and IN THIS MOMENT, metalcore heavyweights UNDEROATH, ATREYU and BEARTOOTH, up-and-coming blues-rockers JOYOUS WOLF and THE PICTUREBOOKS, and more.

With only 10,000 tickets available for purchase, Las Rageous offers the rare opportunity for fans to enjoy a festival experience in an intimate outdoor setting. Located just off Las Vegas Boulevard at Third and Carson Streets, Las Rageous will take over two city blocks of the historic downtown area. All ages are welcome and doors open at 4:00 p.m., with headliners taking the stage at approximately 10:00 p.m.

Early bird tickets will be available starting on Wednesday, December 6 at 10:00 a.m. PT, for those who purchased tickets to last year’s event. Unique codes will be provided from Ticketmaster via e-mail this Tuesday.

Presale tickets will be available Thursday, December 7 from 10:00 a.m. to 10:00 p.m. PT. Presale passwords can be obtained by signing up for the Las Rageous e-mail list at LasRageous.com, or from radio partner KOMP-FM.

General tickets will be available to the public starting on Friday, December 8 at 10:00 a.m. PT. 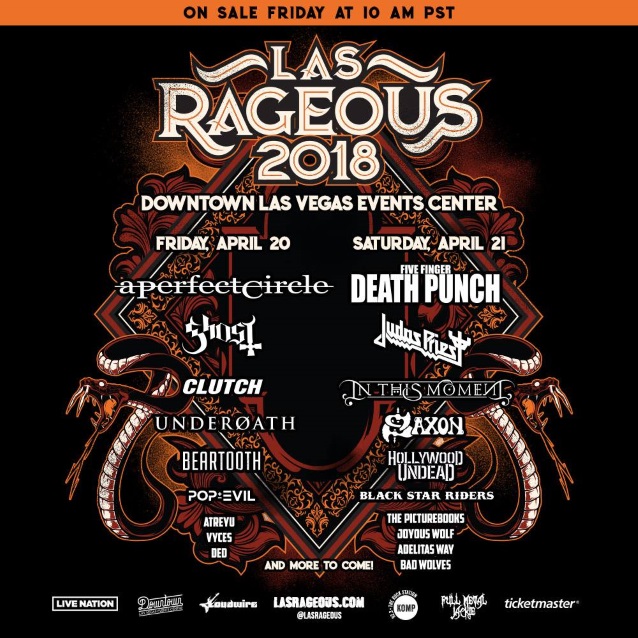