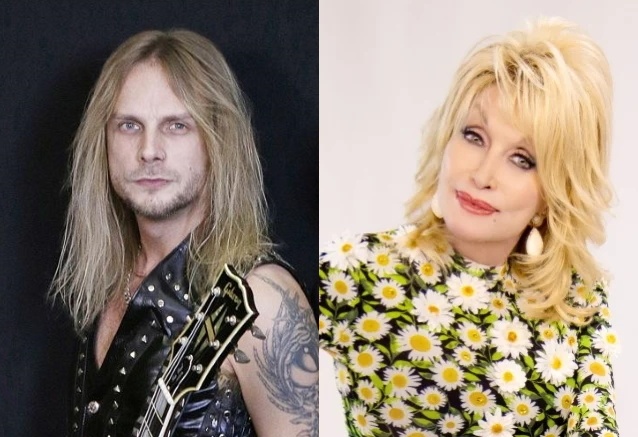 JUDAS PRIEST's RICHIE FAULKNER On DOLLY PARTON Taking Herself Out Of Running For ROCK HALL: 'It Was A Classy Move'

JUDAS PRIEST guitarist Richie Faulkner has praised Dolly Parton for taking herself out of the running for the Rock And Roll Hall Of Fame's 2022 class of inductees.

On Monday (March 14),the 76-year-old country music legend asked the Hall to withdraw her name from the 2022 ballot, saying "I don't feel that I have earned the right. I really do not want votes to be split because of me, so I must respectfully bow out."

Faulkner, who joined PRIEST in 2011 and would not be inducted into the Rock Hall along with the other members of the current lineup, was asked about Parton's decision to bow out of the highly esteemed honor in a new interview with "Rock Of Nations With Dave Kinchen". He said (as transcribed by BLABBERMOUTH.NET): "I think it was a classy move, really. I think she recognizes her brand, and it didn't necessarily fit into the Rock And Roll Hall Of Fame. And I think it raises questions to what the Rock And Roll Hall Of Fame's brand is as well.

"I've said this before, but I think the greatest accolade any band can have… You've toured the world for 50 years, you've put out music for 50 years, you've got a loyal fanbase for 50 years," Faulkner added. "No one's more grateful that these guys in this band, and I know that. They're still putting out music, they're still making music, they're still touring the world. And I'm repeating myself here, and I apologize, but I think that's more of an accolade than a trophy on a shelf; I really do. I think that's worth much more than getting in the Rock And Roll Hall Of Fame. That's just my opinion. And I know the [rest of the] band don't share that opinion; that's just my opinion. It's a loyal fanbase for 50 years. What more can you ask for?"

According to the Hall Of Fame, the JUDAS PRIEST members that would get inducted would include current members Rob Halford (vocals),Ian Hill (bass),Glenn Tipton (guitar) and Scott Travis (drums),along with former members K.K. Downing (guitar),Les Binks (drums) and late drummer Dave Holland.