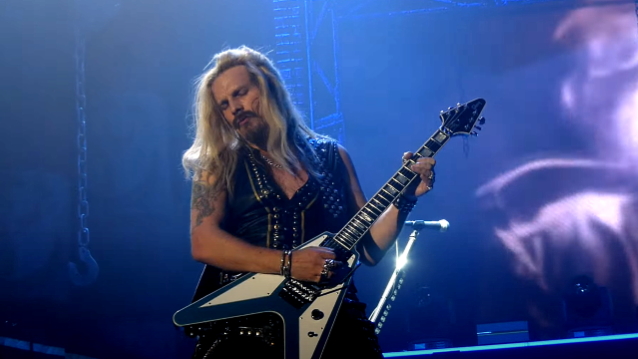 The British heavy metal legends announced on Monday (September 27) that they were postponing the remainder of their U.S. tour so that Faulkner could be treated for a heart condition. The following day, his girlfriend Mariah Lynch, daughter of former DOKKEN guitarist George Lynch, said that Richie was "stable and resting" after undergoing "major emergency heart surgery."

On Tuesday, TESLA guitarist Frank Hannon took to his Instagram to write: "Sending love and healing power to Richie Faulkner @falconfaulkner .. I haven't met him yet but he's a rock n roll brother that my guitar playing friends all love very much and they tell me how cool of a guy he is. I heard he played a show then walked off stage having a heart attack and had 10 hr open heart surgery last night. Hang in there Richie and I look forward to meeting / jamming with you someday! You got this!"

Produced by Live Nation, the rescheduled "50 Heavy Metal Years" trek kicked off on September 8 in Reading, Pennsylvania and was slated to run through October before concluding on November 5 in Hamilton, Ontario.

PRIEST's next date was originally set for tonight (Wednesday, September 29) at the Mission Ballroom in Denver, Colorado.

"Get well soon Richie," wrote Bonamassa. "One of the nicest, most talented and genuine people I have met in this business."

Former WHITESNAKE and DIO guitarist Doug Aldrich wrote: "Just heard our brother Richie fell ill and is in the hospital… Prayers for a speedy recovery."

Holt wrote: "Here's wishing Richie a speedy recovery, get well soon brother, one of the greatest guitarists walking this earth, and nicest guy too."