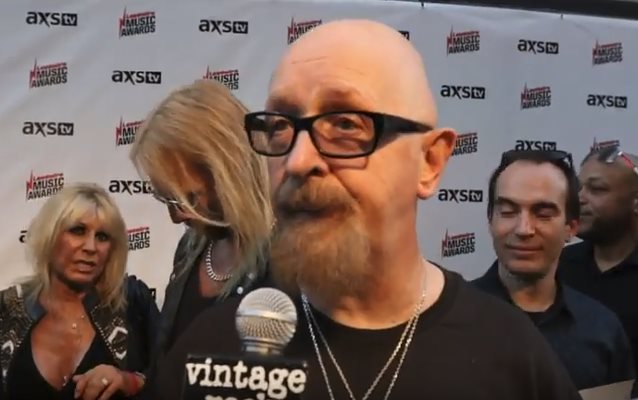 JUDAS PRIEST's ROB HALFORD On 'Firepower' Album: 'This Is Some Of Our Best Work, Without A Doubt'

During an interview on the "black carpet" of yesterday's (October 24) Loudwire Music Awards in Los Angeles, California, Halford told VintageRock.com about PRIEST's upcoming disc (see video below): "It's great. This is what PRIEST lives for. We're a hard-working metal band still making the metal forty-odd years later, thanks to our glorious metal fans around the world.

"So we make music now, obviously, still for our own pleasure and enjoyment, and the challenge of finding a new riff and a new melody is always very… It's a great feeling," he continued.

Rob also talked about the process of making the new PRIEST album, saying: "We came off the 'Redeemer Of Souls' tour, had a little bit of a break, like we've always done, and then we dove straight back into the second record with Richie [Faulkner, JUDAS PRIEST guitarist]. And it's Richie's moment, really, because when we did 'Redeemer Of Souls' with Richie, obviously it was his first time with PRIEST as a writer, so I think it was great how Richie coming into the band at that point, and then going through the writing experience and the world tour together really put Richie in a better place for when we went in to do 'Firepower' — just because you learn so much in a band."

Halford added: "Richie's playing is fucking unbelievable on this album. And just the contribution, I think, as the writing team of Richie and Glenn [Tipton, JUDAS PRIEST guitarist] and myself. This is some of our best work — without a doubt."

Sneap, who plays guitar in the reactivated British occult metal act HELL, recently told Serbia's Hardwired magazine that PRIEST's new album will contain "a really good energy and some real classic moments." He said "Rob did great" during the album's final recording sessions. "I'll tell you what: for someone who's got that much experience, there's no ego there at all," he said. "We'd do, like, six or seven passes, and I'd ask him to try something a bit [different] on this part, and he was, like, 'No problem.' And he'd give me another four takes with a slightly different vibe. And then me and Tom Allom would sit there and we'd comp it, and we pretty much agreed on everything."

As previously reported, PRIEST was nominated for induction into the 2018 Rock And Roll Hall Of Fame, part of a list of nineteen potential candidates.

Inductees into the 2018 Rock Hall will be voted on by a group of more than nine hundred artists, historians and music-industry professionals.

The 2018 inductees will be announced in December and the induction ceremony will be held at Cleveland's Public Auditorium on April 14, 2018.